Gone are the clean lines of the past. In the digital age, ‘minimalism’ has a new guise

Stereos, CDs, DVDs, alarm clocks, calendars, desktop computers, landline telephones, even books – the list of things that have been replaced by the tiny technology in our smart phones and tablets is staggering. Now that so many objects have been eliminated from our homes, the minimalist aesthetic is finally within reach.

But today’s minimalism is different from the clean-lined perfection of the past. Joshua Fields Millburn and Ryan Nicodemus, authors of theminimalists.com, describe minimalism as ‘freedom from overwhelm…freedom from the trappings of consumer culture…a tool to rid yourself of life’s excess in favour of focusing on what’s important.’

Contemporary minimalism is not about the idealised absence of things – eradicating personality and imperfections in favour of a utopian and anti-individual ‘ideal state’ – but about using the absence of things to enhance the meaning of what we chose to retain; quieting the room to enable the chosen pieces to speak clearly about what matters to us.

So how are we choosing those objects and what do they have to say?

In the digital age, it seems we crave the imperfections of analogue. Low-tech living is seeing a renaissance precisely because of its flaws, argues theoretical physicist Dr Mike Evans. ‘When you switch on an old radio, you hear a few seconds of white noise as the tuner seeks the right frequency. It’s a nice sound. Modern gadgets are designed not to betray the imperfect physical nature of their workings. That is a shame, because imperfections are important in helping us to understand the world.’

We are also starting to value different things. What is Luxury?, an exhibition at London’s Victoria and Albert Museum, explores our shifting aspirations. ‘Definitions of luxury are not only changing, but are intrinsically personal,’ says co-curator Jana Scholze. ‘To some people, luxury may be drinking tea from a cup designed to best highlight the flavour; for others, it’s skimming stones with their children.’

Interior designer Joanna Laajisto agrees: ‘Luxury today is time and quietness – two things that we don’t have during our hectic days. People want to make their homes safe havens they can retreat to with their families.’

Couple a craving for imperfection and the concept of luxury shifting from the produced to the personalised with environmental concerns about the throwaway culture of recent decades, and it makes sense that we’re choosing to fill our homes with handcrafted objects made from natural materials that will stand the test of time.

‘We have become more interested in materiality and hanker after things with a sense of human touch,’ says Natalie Melton, co-founder of Mayfair shop The New Craftsmen. ‘The love and energy that goes into making things is part of what we buy. We want to know the makers, where they come from, how they make, why they choose particular forms or finishes.’

The new minimalism is about selectivity in the stories we allow our environments to tell, so the narrative behind the products in our homes are becoming as important as the products themselves. ‘Clients are looking for stories – a chair handed down from their grandparents or a mirror that they found at a flea market in Paris during their honeymoon,’ says Laajisto. ‘People are acknowledging the state the environment is in and turning against mass consumerism. Now more than ever, they realise the value of a one-off piece from a local woodworker or a rare find from a furniture auction that is crafted to last a lifetime.’

The desire for hand-crafted furniture with a story perhaps explains the rise in popularity of mid-century design, particularly Scandinavian. A pair of early Finn Juhl armchairs recently sold at auction for £74,500 – versus £2,000 in the early 1990s. ‘These things were made to last,’ says Marcus McDonald of auction house Phillips. ‘They were never intended to be disposable goods. And if you look at Finn Juhl’s interiors, they were very sparse – they only included what was necessary. Perhaps that’s what we’re coming back to.’

The new minimalism is about a small selection of carefully curated, meaningful objects. As interior designer Ilse Crawford says, ‘Everything matters, nothing is too small to care about, and actually those are the things we should care about more than the big things. Good design makes a difference.’ 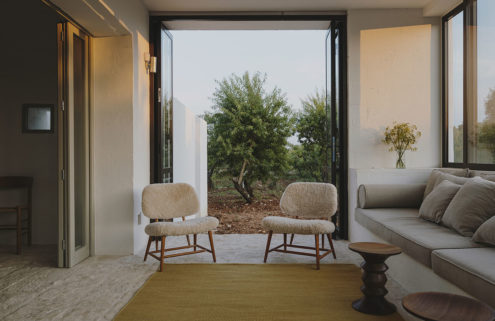