Rental of the week: a surfer’s tropical island retreat in Panama

Surf’s up at this Panama holiday villa, which hides among the trees and has its own private beachfront.

Casa Comunal sits on the shores of Isla Colon, the northernmost island of Panama’s Bocas del Toro archipelago, and was created by self-taught architect Jordan Christopher. An avid surfer and keen traveller, Christopher wanted somewhere he could bring his passion – and his friends – together.

‘It was important to me to unite travellers, the locals, and nature, and that was the triumvirate behind Casa Comunal,’ he says.

The boxy Panama holiday home is built from glass, steel and concrete, and comprises two breezy double-height apartments that are connected by an atrium. Casa Comunal was made using local materials where possible, as well as some elements Christopher collected on his travels…

‘Everything was carried in my luggage from multiple flights,’ he adds. ‘I even flew all the way here with a corner-style kitchen sink because no store in the country sold them at the time.’

The apartments, dubbed Casa Norte and Casa Sur, have three and two bedrooms respectively. Each has its own eat-in kitchen, living room and bathrooms, and walls of glass that offer panoramic views of the surrounding flora and beach.

Interiors of the island villa blend rustic and industrial touches thanks to exposed concrete and steel beams. Rooms are furnished with handmade pieces, such as hanging daybeds – made from up-cycled pallets and rope – and hammocks in the communal areas.

Outside, there’s a wrap-around deck and a fire pit.

Casa Comunal sleeps up to 14 people, and can be rented in its entirety from $600 per night via Boutique Homes. You can also rent the apartments separately via Airbnb.

Isla Colon is popular with surfers, and perfect waves are a few minutes from the holiday home. Some of the 300-or so islets that make up the archipelago can also be explored via kayak. On land meanwhile, the town centre is a 20 minutes bike ride away – or a short taxi ride – where you’ll find cafes, pubs and restaurants, and there are a number of hills for hiking enthusiasts. 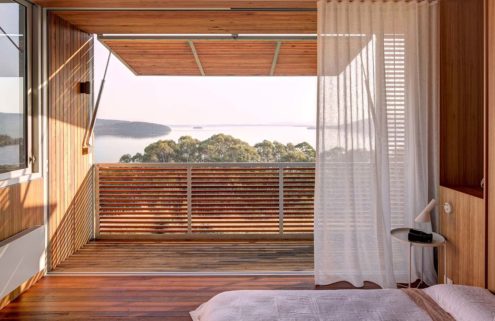 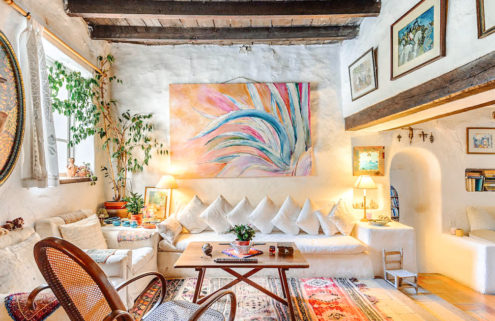