The David and Gladys Wright House will be donated to the School of Architecture at Taliesen, it’s been announced on Frank Lloyd Wright’s 150th birthday.

Zach Rawlings bought the spiralling property in Arcadia, Phoenix, for $2.4m back in 2012 after its owners planned to raze and redevelop the site. After his initial scheme to turn it into a museum was met with opposition from the local community, Rawlings’ decided to donate the building to the school, which started as an apprentice program set up by Frank Lloyd Wright in 1932.

‘What’s great about this is that we get to live in Frank Lloyd Wright’s work. This allows us to come off the hills, be right in the middle of the Phoenix valley, and live and work inside this incredible house. It helps us as students and teachers understand how we can live in the desert southwest,’ says Aaron Betsky, the school’s dean.

With its emphasis on practical experience, the School of Architecture at Taliesen is currently split across two sites: Taliesin West up in Scottsdale, Arizona, and Spring Green in Wisconsin. The David and Gladys Wright House expands its Arizona campus, and will be used as a place for architecture students and faculty to live, work and learn.

Rawlings and Betsky hope to share the building with other Frank Lloyd Wright fans too: ‘Once the house is fully restored we will be able to welcome the public in to share this incredible house,’ says Betsky.

Some caveats are in place, however. Rawling’s donation hinges on the organisation raising $7 million by the end of 2020 to fully restore and run the site. Permits must also  be granted by the city for the building to operate as a school.

But according to the Arizona Republic, Rawling expects around 30,000 people to visit the house every year.

Frank Lloyd Wright originally designed the David and Gladys Wright House for his son in 1952, and it’s ribboning, spherical design is an early forerunner to his design for the Guggenheim Museum in New York.

[Via The Arizona Republic & Curbed] 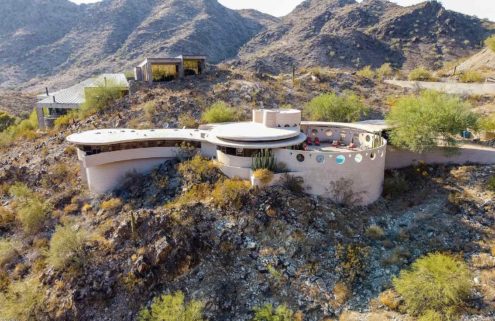