Interiors, News I by Milly Burroughs

Twenty-five years since launching the eponymous nightclub in London’s Southwark, Ministry of Sound has opened The Ministry, a coworking club in a refurbished Victorian printworks.

The new Borough Road creative space – adjacent to the nightclub – focuses on the music and media industries. It features meeting rooms, offices, desk spaces, a restaurant and a seventy-foot bar spanning the length of the ground floor. Also in the mix are recording studios, immersive tech suites and there’s even a tequila bar in the ladies toilet – presumably only operating at night.

Having seen the development of Squire & Partners’ headquarters in Brixton, The Ministry’s creative director Simon Moore engaged the award-winning architecture practice to turn the building into a 21st-century coworking space that embraces raw elements of the original architecture.

‘We asked ourselves, “How do you take something stripped back and make it beautiful?”’ says Moore. ‘As soon as we saw Squire & Partners’ The Department Store, we knew they could deliver what we wanted.’

The building was last used as originally intended by Letts of London and its architecture defines the layout and interior aesthetics of The Ministry, which fuses old and new. ‘The building itself is actually in four parts,’ says Squire & Partners interior design director Maria Cheung. ‘Even on the upper floor you can see how the office partitions were placed. The way the parquet flooring was laid is still visible.’

Soundproof rooms, a sprawling industrial event space and a plush cinema room reference the decades of music and entertainment world experience that Ministry of Sound brings to The Ministry. This has been used to inform the interior design in the London coworking space, where breakout hubs and social areas exist to bring down industry barriers.

Says Moore: ‘This shouldn’t be a closed shop music industry place, because that’s actually not how culture is it at the moment. Collaboration is the fundamental reason behind this. We don’t want loads of people in the building who are exactly the same.’ 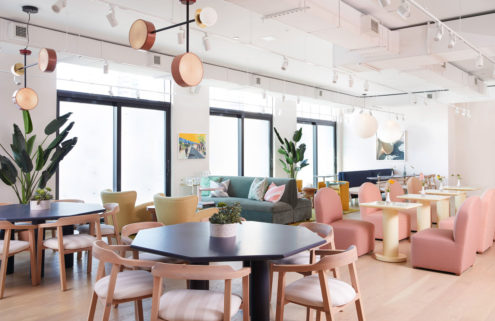 The best women’s coworking spaces across the globe