Interiors I by Hettie Judah

How I live: gallerist Veerle Wenes

Entered through a modest door on a quiet street near the city’s medieval centre, the gallery commences as an angular white corridor with a slanting wall before opening out into a light-drenched, multi-level space overlooking two courtyard gardens – one suspended a storey above the ground.

While the structure now used for the gallery dates from 1979, the herringbone-patterned stone floor links through into Wenes’ home in an adjacent building that was formerly part of a convent. The high-ceilinged rooms are dressed with art and design from Wenes’ collection, glimpsed tantalisingly through linking doors that are thrown open during gallery events.

In Wenes’ home, twentieth-century design pieces by the likes of Maarten Van Severen sit alongside furniture by artists and designers represented by the gallery, including Muller Van Severen, a studio co-founded by the Maarten’s son Hannes.

‘The part we live in is much older, we think from the end of the 19th century,’ says Wenes. ‘It was where the nuns worked, so had poor or even no decoration, only a huge open fire to keep the workers warm.’

Wenes found the building for sale online and bought it ‘with a handshake, almost at first sight’. Formerly used as a furniture salesroom, it was completely unequipped for domestic use.

Today the gallery and home function in concord as an art and design space and a modern day salon, a site for talks and events that, like the building itself, encourage crossover between different disciplines.

We spoke to Wenes about living and working in this unusual Antwerp space, which is currently playing host to The Cutlery Show.

What does home mean to you?
It’s the space where the people that you love are. The space you want to come back to, and that you arrange with the pieces and objects that you adore: objects and art that have a story, or a memory.

What do you like best about the architecture?
Its height and quietness in the centre of the city – it’s a space that gives onto an inner garden rather than the street – the huge open fire, and the fact that it is next to the gallery. The gallery and the home are both my world as I make no distinction between what’s work and what’s not.

Do you use your home as an extension of the gallery, or is it fully private?
I often let people in, but only when I decide to – so that is the private part of it. I invite them when there are openings or other events, or when visitors are very interested in art and design.

How do you balance living and working in connected spaces?
I think of the spaces more like a salon, in particular for my meetings with artists and designers around the big table in the central living space. This table is everything in the house: it’s used for eating alone or in big groups like family dinners; it can be an office table or a meeting table. It changes all the time.

How does the particular architecture of the gallery influence your curatorial practice?
Sometimes I will invite people to do in situ installations. I am very flexible in using the spaces, which are very diverse. Because of the different levels to the gallery I can show different people, or different aspects at the same time. The building always gives me inspiration for the shows.

You are a great collector, as was your father. What three objects would you save in a fire?
I would save letters and small memorabilia given to me by my daughter, and the painting by Raoul De Keyser that came from my father. 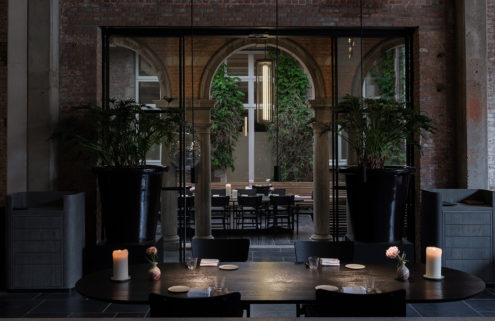