Inside her colourful converted chapel

Morgwn Rimel has moved home some 25 times in her life, growing up in the US and arriving in London nine years ago by way of Montreal, Tokyo, Singapore and Sydney. Such a nomadic existence has given her an unusual relationship with possessions.

‘For many years I had nearly none at all and lived in almost monastic way,’ says the curator and creative entrepreneur. ‘Now I’m very careful and deliberate about what I live with. I’d rather have nothing than the wrong thing.’

Don’t expect cushion-laden sofas inside her apartment, housed in a 19th-century former methodist chapel. In this minimalist, light-filled sanctuary you’ll find a hammock strung between two trees, and sculptural chairs by Muller Van Severen atop a rug by the Bauhaus school’s Gunta Stölzl. The latter is on loan from a friend who didn’t have space for it. ‘I’m the only person she knows who’s OCD enough to ensure it won’t be damaged,’ she explains.

Rimel spent seven years as director of The School of Life, an organisation that helps develop emotional intelligence, before founding her culture design studio, Superculture. The School’s lessons – applying psychology and philosophy to everyday life – extend to her home, which she renovated with the help of West Architecture.

‘Spaces can easily make you feel hectic, exhausted and drained,’ she explains. ‘I’m naturally introverted so in a city like London, it’s important to create somewhere that feels like a calming refuge.’

Hence the pared-back bedroom in a wooden box, inspired by her time in Tokyo. The only furnishings are a bed, vase and meditation stool. ‘It’s an introvert’s perfect hideaway,’ she says.

Rimel, who is now working on Skyroom – a rooftop social housing project in the capital – opened up her home to the public during London Design Festival. She teamed up with her neighbour Louise Grey on a pop-up show across both their houses, curating them with pieces by local and international designers. It was the Instagram hit of the festival and lured hundreds of visitors to the depths of north London.

‘I wanted to show people that you can take design risks while still creating a comfortable home,’ she says.

Rimel has been unable to part with most of the objects from the show, which still remain in situ. Here she leads us around…

What is a home to you?
Morgwn Rimel: It’s a space that reflects your inner landscape – that brings your emotions, passions, and ideals to life in a tangible way. It can support who you are and who you want to become but it can also help you rebalance inner struggles and deal with weaknesses. My home is a refuge; a place where I can fall apart and come together again. I can be overly serious, so having a design aesthetic that is optimistic and playful is a counterbalance to that – and to the grey landscape of the city.

What were your main design interventions to your home?
MR: When I moved in, the space had already undergone one phase of renovation by West Architecture, who added a suspended plywood mezzanine level. I retained this element, but worked with the practice again to extend and almost entirely reconfigure the apartment, inserting a second, enclosed mezzanine along the roofline which holds the bedroom.

The most important thing for me was to maximise the volume and light. The living room is more than double height, with a bank of tall arched windows. I felt claustrophobic when I first moved to London. I’d come from Sydney – a city with wide, open skies – whereas here, the sky can feel like it’s closing in on you. But in this space, I can breathe easily and feel a real sense of expansiveness.

What’s your favourite space in your home?
MR: I get a real kick out of watching the light change in the living room. It’s totally different across the seasons. You get crazy shadows created by the plants and furniture, because everything’s on a generous scale. It’s a great space for daydreaming.

How does the ethos of your home chime with your other projects?
MR: I’m interested in how we can create and shape – not just consume – design and culture. As well as considering a project’s environmental impact, it’s equally important to consider the social and emotional impact. For one of my projects, Skyroom, I’m working with Arthur Kay to create design-led, low-cost, prefab homes on London’s disused rooftops for key urban workers, to unlock the hidden economic value of these neglected spaces, while enhancing the quality of life for our city’s nurses, policemen and teachers. These people allow our communities to thrive. My projects are all about finding creative ways of making positive, constructive cultural change – which need not be incompatible with commercial sustainability and success.

What’s the biggest design luxury in your home?
MR: The way the bedroom has been specifically designed to induce a state of calm. I’m an insomniac so I thought hard about how to reduce noise and visual distraction, without it feeling overly ascetic. It’s a sensual, intimate space, influenced by my appreciation for Japanese aesthetics. The room is lined with white-stained plywood and there’s a sliding shutter that can be opened for a wash of soft light or closed for complete blackout when it’s time to sleep.

If you could live in any building around the world besides your own, which would it be?
MR: A weird, hybrid combination of the work of Donald Judd and Luis Barragán, with elements of Veerle Wenes’ amazing home gallery in Antwerp, all mashed up on a cliff face overlooking the ocean. I think about my ideal living situation in my head all the time, which I codename ‘new Marfa’. It’s my utopian vision of where I want to be.

Read next
How I live: at home with adventurer and art collector Erling Kagge

6 of the best New York apartments to rent 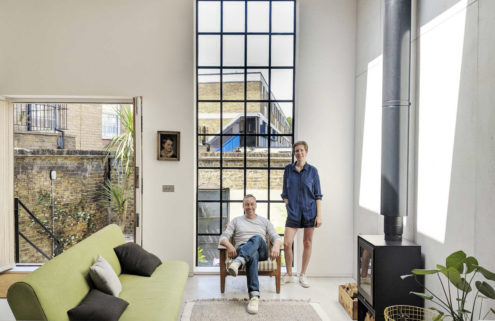