Take a technicolour tour of the German capital’s hidden corners

‘[Berlin’s] architecture is quite boring. This is why colourful buildings draw my attention’, says Bereket, who studied architecture in Istanbul before moving to the German capital eight years ago for her masters in art.

Bereket started seeking out the city’s more vibrant structures as an antidote to the sombre tones of the monochrome post-war buildings that surrounded her.

Among the sites she’s snapped are tower blocks clad in pastel hues and the the primary coloured balconies of a modern high-rise. Other flashes of colour come from paper streamers and street murals painted onto the sides of buildings.

‘I have an obsession with geometry and abstraction which consists of repetitive patterns and colours,’ she adds. ‘These colourful façades have it all together, and they’re very photogenic’.

Bereket’s images also seek to capture the calmness of Berlin.

‘Istanbul is huge, crowded, stressful and changing unbelievably fast, especially when it comes to the architectural appearance of the city,’ she says. ‘Berlin is smaller, and quite peaceful and stable in comparison.’

This project came to use via our hashtag #thespacesilike. Are you a photographer working on a project we’d like? Tag us on instagram or send us an email via submissions@thespaces.com 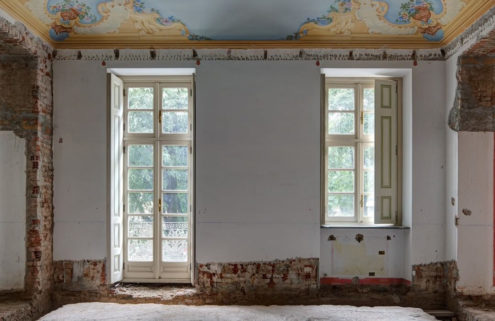