Interiors I by Merlin Jobst and The Spaces Team

Architectural surrounds that are as mouth-watering as the food

Berlin is known for its gritty aesthetic with rough-and-ready eateries across the city. But its fine dining scene has a more nuanced character, serving modern cuisine amid battle-scarred historic surrounds.

From an Art Deco school girl’s school to a converted apothecary,  buildings are being repurposed to house these culinary hubs. And their design is every bit as enticing as their menus.

Join us on an archi-tour of some of Berlin’s most beautiful restaurants.

Kink’s sophisticated cocktail menu is accompanied by small plates such as deconstructed tacos and chicory filled with minced lamb and mole, and there’s a curated programme of live music every night of the week. See more on its design.

Is there such a thing as too much colour? To The Bone’s chef and founder, Giacomo Mannucci doesn’t think so. He tapped Hing Kong-based designer Piero Zanatta to drench his Mitte Italian eatery in a sumptuous shade of emerald green, offset by flashes of industrial concrete and steel, gold velvet banquettes and sapphire blue and ruby red dining seats.

Mannucci runs twin Berlin restaurant To Beef or Not to Beef, which unsurprisingly features a meat-forward menu. To The Bone’s is the more refined sibling, which is due to reopen to the public in August 2020 following the recent lockdown in Germany and it will feature some refreshes. ‘We’re using the time of the Corona pandemic to make To The Bone even nicer and bigger for you,’ teases the restaurant’s team.

This Michelin-starred restaurant sits within the renovated Jewish School for Girls, designed by Alexander Beer, and opened in 1930. The enormous green-tiled building is a pre-war triumph, and Pauly Saal – opened by restauranteurs Stephan Landwehr and Boris Radczun – mirrors this with a menu of straightforward but high-quality European cuisine, beneath shimmering chandeliers and a vast red-and-white rocket.

The Das Stue hotel sits within a former Royal Danish embassy, built in 1939, with dazzlingly bright interiors by Patricia Urquiola. Its restaurant, Cinco, offers a Michelin-starred, avant-garde take on Mediterranean cuisine, served up in an enormous space divided into semi-private nooks – intimate spaces in which diners can truly experience their 17 intricate courses.

Named after a utopian German children’s book, Panama was designed by Contemporary Food Lab (CFL) alongside interior architects Nora Witzigmann and Karo Butzert. Its bright renovated factory space is decorated with modern art and its menu of light, uncooked (but not necessarily raw) food is – according to CFL founder Cramer-Klett – crafted to help diners realise the beauty of the world in which they live.

Berlin’s resplendent Soho House building was designed to be a Jewish-run department store by architects Georg Bauer and Siegfried Friedlander in the early 20th century, before being overtaken by the Hitler Youth in 1937, and later the archives of the Communist Party. The building is now the playground of the city’s chicest people, and the spacious ground-floor, laid with heavy white floorboards and peppered with thick granite pillars, is dedicated to offering flavours, colours, and textures that only come with extraordinary produce. A second incarnation is open at new culture hub, 180 The Strand.

Eins44 takes over a turn-of-the-century distillery inside a cavernous Art Deco courtyard in Neukölln. The building’s industrial past has been retained in the restaurant’s interiors, lined with tiles and lit by a tangle of heavy industrial lights. Eins 44’s kitchen serves a distinctly Franco-German menu that has won it a Michelin star.

In its restaurants and clubs, Berlin loves to utilise its rougher parts, often to dazzling effect. This is true of Yumcha Heroes – a mouthwateringly good dim sum restaurant in a repurposed butcher’s shop, which retains both the spotless tiling and utilitarian decor of its bloody former life.

Kreuzberg’s ORA – a Viennese-style restaurant, cafe, and bar – is faithful to the building’s pastlife as a traditional apothecary. Wooden cabinets, medicine drawers and glass jars labelled in Latin line the walls, while original details like the stucco ceiling have been retained. We recommend picking up your culinary prescriptions here.
Oranienplatz 14, 10999 Berlin

8 of Berlin’s most unusual art spaces. 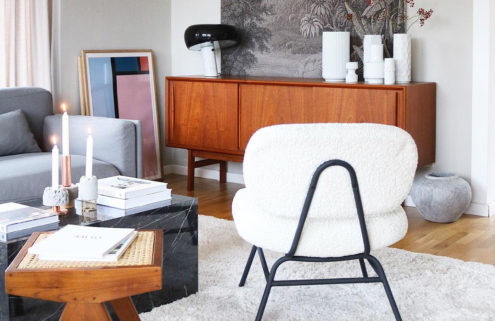