Hear the sounds of satellites in the NASA Orbit Pavilion

Most of us won’t be heading to space any time soon but we can now hear how its sounds, thanks to design firm StudioKCA. The Brooklyn practice has created a conch-shaped structure that channels the resonations of NASA satellites orbiting Earth.

About 70 perforated aluminium panels, each 25 ft in length, make up the spiralling Orbit Pavilion, which is currently on show at the NASA Jet Propulsion Lab in Pasadena, California. 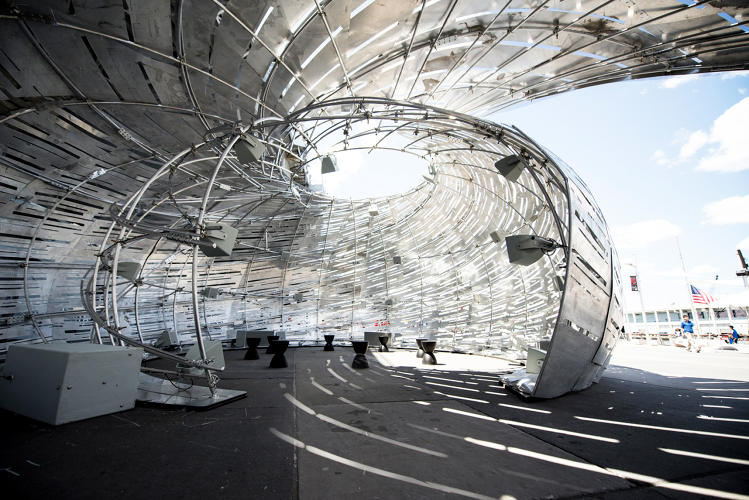 StudioKCA’s aim, it says, was to compose ‘a symphony built out of the sounds of satellites in space’.

In reality, orbiting spacecrafts are silent so the NASA Orbiting Pavilion experience is more of a sonic interpretation.

Speakers inside the 1,100 sq ft structure are each tuned with a sound corresponding to one of the space agency’s 19 satellites. The shape of the pavilion helps to amplify these notes, similar to how conch shells channel surrounding sounds when you put your ear to them.

Acoustic engineer Shane Myrbeck of design firm Arup helped StudioKCA with the project, which was commissioned by NASA to make spacecrafts – orbiting 100 miles above – seem more accessible to the public.

The Orbiting Pavilion will be on show outside the NASA Jet Propulsion Lab until summer, before it moves to the Huntington Botanical Gardens in San Marino, California, later in the year.