Serene living quarters on the water

People are ditching bricks and mortar in cities across the globe in favour of floating homes.

Canal boats have long been favoured as off-grid urban retreats, with the added bonus that their occupants can up-sticks at the drop of a hat. But they’re often on the smaller – and narrower – side of waterside living. Here are five floating homes that use their square footage wisely, from a barge with views of the Louvre to an architect-designed minimalist retreat.

3 bedrooms; £399,950 via Aucoot
Formerly a coal barge, Liverpool 91 extends to 1,250 sq ft in Gosport near Portsmouth. The Hampshire houseboat is being sold with tidal mooring and has been overhauled by its owners who’ve rebuilt the 1940s barge from the hull up. Living spaces are now open plan and set across two levels, including three reasonably sized bedrooms.

Interiors are whitewashed to maximise the feeling of space and reclaimed floorboards sourced from a Victorian school in Portsmouth are laid throughout the floating home. It has a number of portholes and windows but the rooftop deck – built using timber from a defunct Liverpool water tower – is the best place to drink in those water views.

Quai de Conti barge in front of the Louvre, Paris

4 bedrooms; €1.2m via Espaces Atypiques
Located just over the river from Paris’ Jardin des Tuileries, this 39-metre-long barge is so big it has been divided into two independent living spaces. There are views to the Louvre and across the Seine from its portholes, and plenty of space to sit and enjoy them from the boat’s main living space.

The listing says that the two flats can be easily combined, giving the boat four bedrooms in total, as well as an upstairs study – reached by a curving metal staircase. Its interiors (which favour bright pops of traffic-cone orange in places) will need a refresh, but the bones are impressive and the views even more so for this floating holiday home.

1 bedroom; 4.75m DKK via Adam Schnack
Nautical living gets a Nordic twist at this five-bedroom floating home, located in Copenhagen’s Holmen neighbourhood. The boat was built in 1910 as a charter ship before being converted into a full-time home. Would-be owners with the travel bug will be pleased to know the engine is fully functional, meaning the home can leave port at any time.

For those that are more interested in cosying down on the water, the entire boat has been sandblasted, painted and insulated. Whitewash walls and wooden floors run throughout the home, forming a neutral backdrop for future owners.

1 bedroom; £290,000 via Aucoot
31/44 Architects have taken minimalism to the water for this 60-ft-long canal boat, moored at London’s St Katherine’s Dock. Inside is a blank canvas, outfitted with bespoke upholstery, furniture and fittings by the studio – including handmade kitchen worktops made from recycled yoghurt pots.

The serene one-bedroom houseboat is lined with Douglas fir flooring and tulipwood cladding, and its monochrome colour palette is ready to receive its new owner’s personal stamp.

3 bedrooms; €1.1m via Espaces Atypique
This Freycinet barge dates back to 1939 and was home to German painter Hans ‘Jimmy’ Giebeler. Its riveted hull hides a huge loft-style living space, while its wheelhouse has been converted into a timber-panelled sitting room. The three-bedroom floating property has two terraces and is moored within sight of the Eiffel Tower.

Read next:  BIG designs a floating city that could survive a hurricane 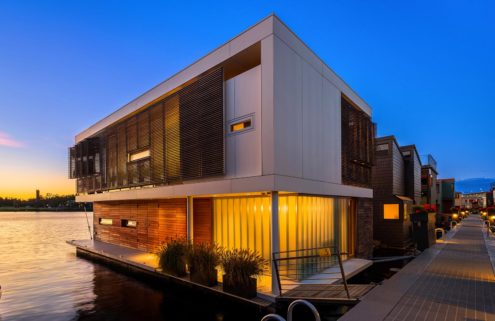 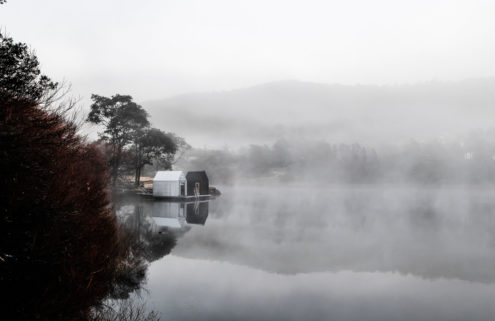