Converted Mission House and barracks for sale in Sweden’s Gotland

The hard work’s already been done converting this Mission House and former barracks into a contemporary holiday home on the Swedish island of Gotland.

Built in 1905, the wooden mission house retains its oversized windows and original volumes. Roma Larsarve 190 was completely overhauled by its current owners in 2013, who restored everything from its roof down to its floorboards.

Its old church hall is now a soaring living and dining room, and a spiral staircase leads up to the mezzanine level television room, which could double as an extra bedroom (there are currently four). Large stained glass windows nod to the building’s heritage, while rooms are dotted with cosy soapstone stoves and woodburning fireplaces.

In a two-for-one deal, the sale of the Gotland property – on the market via Visby Mäklarna, starting from 2.95m kr – includes former military barracks, ‘which were moved to the site in 2000,’ according to the listing.

This annexe has just been converted into a self-contained three-bedroom home with its own kitchen and living room. It offers space to house summer guests – or potential rental income as a holiday let.

Something to note is that the annexe is ready to be connected to the municipal water network, but this is an additional cost that will be picked up by the new buyer.

Roma is in central Gotland, but the island home is only around 2 km to the sea. 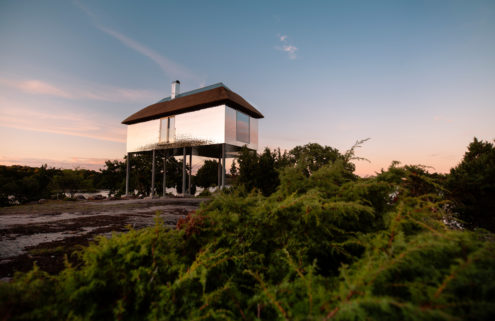