Art, News I by Charmaine Li

Artist Sven Sauer has teamed up with London duo The Connor Brothers to create an immersive maze inside a former Berlin brewery.

Labyrinth of Lies sees 400 umbrellas installed from floor to ceiling inside the Willner Brewery in the city’s Prenzlauer Berg district. The translucent temporary structure leads visitors on a one-way path around the former industrial space.

Upon entering, visitors are met by a wall of black umbrellas. Screens hanging from the ceiling in front of them show fashion ads and magazine covers, with logos and mag titles accompanied with ironic hashtags and taglines such as ‘#REFUCHIC’ and ‘30 Aleppo accessories for the siege season’.

The artists explore themes about truth and fiction, anxiety in contemporary life and validity of the media when reporting on complex issues like the refugee situation in Europe or the 2014 Hong Kong protests. The idea of using umbrellas stemmed from the latter.

At every turn there’s something new – multimedia sculptures and framed satirical posters. In the final part of the exhibition, a dark narrow staircase leads to the brewery’s former oast house, where instead of drying hops, the figure of a masked protester hangs engulfed in a swirl of fog with ominous sounds reverberating.

‘It was interesting for me and the artists to involve the building in the whole installation, working with every single wall and room for the concept,’ said Verena Schneider, curator of the exhibition and founder of the Plus One exhibition series.

Schneider brings together artists represented by her own gallery, Venet-Haus Galerie, as well as local artists to show works in ‘unusual’ environments for the series. For the inaugural event, she collaborated with curator Clara Cremer, who organised The Dark Rooms exhibition last year in the same building.

The Willner Brewery was constructed from 1883 to 1904 and closed its operations in 1990. Nowadays, it’s used as an exhibition and events space.

Read next: Artists transform an old bank into a temporary gallery in Berlin 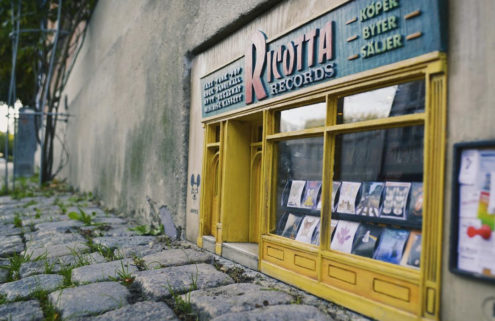