It really wasn’t built in a day…

Rome, the saying goes, is a living museum. Here the history and hubris of Western civilisation is recorded in stone and marble, drawing millions of avid antiquity fans every year.

Mythology dates the founding of the city to 753 BC, but it sits on one of the oldest continuously occupied sites in Europe. Rome has witnessed millennia of tumultuous, seismic times: the rise and fall of the Roman Empire, the ascendency of the Papacy, the Italian Renaissance, Risorgimento, and the establishment of the Italian Republic.

Of course, its ancient sites are the most famous – the Colosseum, the Pantheon, the Forum – and these big hitters are why the city is the third largest biggest tourist destination in Europe. But Rome is innovating too, with modern interventions by Richard Meier and Zaha Hadid’s brazen, energetic MAXXI Museum.

Here are 11 buildings in Rome that have come to define the city.

Built in 12 BC as a tomb for a powerful Roman magistrate, the Pyramid of Cestius now sits at the end of bustling Via Ostiense, near a shabby metro station named in its honour. A relic of the craze for all things Egypt that overtook Rome after its army’s triumphant Egyptian campaign, the pyramid was incorporated into the city walls in the 3rd century AD and then fell out of notice.

In the 1660s, Pope Alexander VII ordered it to be excavated, revealing a burial chamber covered in elaborate frescoes – all of which have now disappeared. In 2011 its marble cladding was cleaned, returning it to white for the first time in 2000 years.

Chattering groups are muted by their first glimpse of the Pantheon’s famous oculus. Built by Hadrian in 126 AD on the site of an earlier temple, it is a physical testament to Rome’s shifting spiritual identity, having first paid tribute to the ancient Roman gods before its consecration as a Christian church in 609 AD. It still possesses the largest unreinforced concrete dome in existence.

The Aqueducts, Via Appia Antica

Known in ancient times as regina viarum or ‘queen of the roads’, the Appian Way was constructed around 312 BC to transport troops and military supplies from Rome to Brindisi on the empire’s Southern border. Parts of the original road still remain today, and at 62 km, the Via Appia has the longest stretch of straight road in Europe. Parco degli Acquedotti is a highlight of the route, a public park cross-hatched by two ancient aqueducts, the Aqua Claudia and the Aqua Felix. These feature in the opening minutes of Fellini’s La Dolce Vita.

Much is made of Rome’s seven hills, but if you want to climb just one of them, the church of Santa Sabina at the top of the Aventine is the perfect reward for your exertions. Built in the 5th century AD, its unassuming exterior is offset by the weightless, minimalist grandeur within, where a vast central rectangle is lit from above by high windows and a gold ceiling, and bordered on each side by colonnades.

The Roman home of the infamous Medici family is one of the most striking of the capital’s many palatial villas, on the edge of the Borghese Gardens. It was acquired by Cardinal Ferdinando de’ Medici in 1576, who used it to house his extensive collections of ancient Roman statues and treasures, most of which are now in Florence’s Uffizi Gallery. After the demise of the Medici line, the villa came into the hands of Napoleon Bonaparte who gave it to the French Academy in Rome in 1803. The Rome building now host artists and exhibitions that are open to the public.

The Giovanni Montemartini Thermoelectric Centre was built in 1912 as Rome’s first public electrical power plant. Filled with hulking turbines and whirring engines, the factory supplied energy to the surrounding area of Ostiense until it was closed down in 1963. And that would have been the end of the story, but in 1997 it reopened under a new guise, positioning ancient pieces from the Capitoline collection in juxtaposition with its now silent machines after the building’s adaptive reuse.

Known as the ‘square colosseum’, the Palazzo della Civiltà Italiana is the definitive work of Fascist architecture, a standing remnant of Mussolini’s potent vision for the ‘new Roman empire’. Commissioned for the dictator’s much vaunted world exhibition and designed by the architects Giovanni Guerrini, Ernesto Bruno Lapadula and Mario Romano, the building was left unfinished when the exhibition was cancelled in 1941.

In 2015, the Rome building was transformed into the headquarters of the Fendi fashion label, causing something of a furore. Fendi’s chief executive Pietro Beccari vehemently defended their choice: ‘This building is beyond a discussion of politics. It is aesthetics. It is a masterpiece of architecture… For Italians and for Romans, it is completely deloaded, empty of any significance of that period… We never saw it through the lens of Fascism.’

Rome is synonymous with Catholicism but it’s also home to the largest mosque in the Western world. Financed by the Saudi royal family, designed by Paolo Portoghesi, Vittorio Gigliotti and Sami Mousawi, and opened in 1995, the Mosque of Rome is the only Islamic temple in the city and has capacity for more than 12,000 people. Its minaret stands at 43 m – a metre shorter than the dome of St Peter’s Basilica which is the highest point in the historic centre.

‘Rome has not seen a modern building in more than half a century. It is a city frozen in time.’ So said architect Richard Meier in 1995 as he set about designing two modern buildings in the Italian capital – the controversial new setting for the ancient Ara Pacis monument (completed in 2006) and 2003’s strange and beautiful Jubilee Church. The church is a modern reinterpretation of a sacred space, with sweeping curved sails, large walls of glass and a minimalist interior, all in Meier’s signature white.

Italy’s first museum dedicated entirely to contemporary art and architecture is a dazzling creation by the late Zaha Hadid that divided critics when it first opened in 2010, but has since become a grudging favourite. An angular, swooping building, with sheets of glimmering glass and steel pillars outside and oversized staircases within, its permanent collection includes works by Anish Kapoor and Alighiero Boetti, and it hosts exhibitions by major national and international artists.

This freshly completed hotel and convention centre by Studio Fuksas is a striking creation that marks a new direction for Roman architecture. A simple glass and steel box, the ‘Theca’, acts as its framework, while suspended in the centre is the ‘Cloud’ – an independent cocoon-like fibreglass structure containing a 1,800 seat auditorium. ‘The interplay between these two spaces is essential to the complex symbolising the connection between the convention centre and the city of Rome,’ says the practice.

Read next: Tour the volcanic island of Iceland in 10 buildings 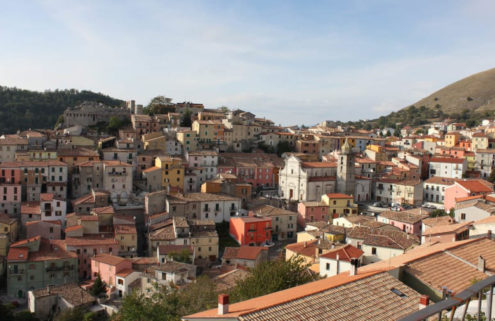 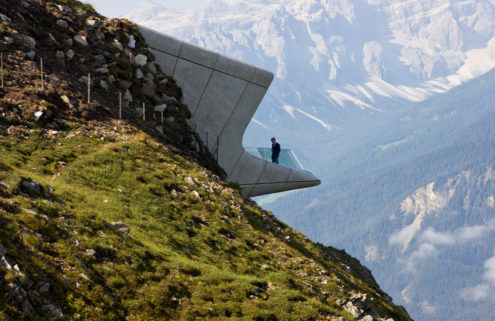 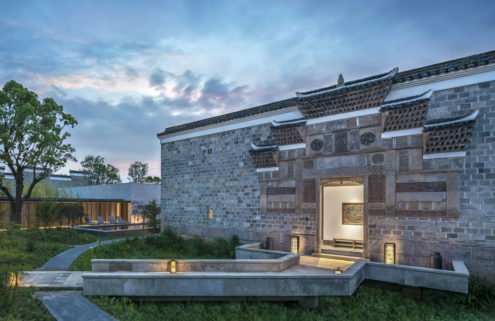 Holiday home of the week: a fresco-filled apartment in Rome