London landmark Tobacco Dock begins a new chapter in its storied history later this month as it vies to become ‘London’s most iconic co-working space’.

The Grade I-listed building, constructed as a tobacco warehouse in 1811, has had many different lives, from a shopping mall to a site for raves. Now its 40,000 sq ft brick vaults will become a nerve centre for the tech industry. With 600 desks and meeting rooms, ‘It will be the largest co-working hub in Europe,’ says Tobacco Dock Ltd co-director, Jonathan Read.

Ahead of its transformation, we took the chance to explore its 19th century chambers.

For nearly a century, the fabled building welcomed ships filled with Virginian tobacco from the across the Atlantic, but it shut for business in 1969 as trade waned and London’s docks became a wasteland.

By the 1980s, Wapping was back on the up. With its riverside views and enormous empty warehouses, the area was ideal for upwardly mobile Londoners keen to recreate New York loft-living in the Capital.

Seizing a chance to tap into Wapping’s burgeoning yuppy population, developers Lawrie Cohen and Brian Jackson aimed to turn the empty Tobacco Dock into the ‘Covent Garden of the East’.

They drafted in support from the government, London Docklands Development Corporation, and architect Sir Terry Farrell to realise their plans, while lining up the decade’s key retail players as anchor tenants for their mall.

Tobacco Dock looked poised for success. But by the time it finally opened its doors in 1989, the country was mired in economic recession.

Compounded further by poor transport links, it failed to draw enough footfall to keep its stores alive, and went into administration a year after opening.

The 1990s and the 2000s came and went and the mall remained empty, as plans were drafted – and dropped – to relaunch it as shopping outlet, convert it into a residential and mixed-use space, and even to turn it into an aquarium.

In 2003, a worried English Heritage put the building on the ‘at risk’ list, simultaneously putting the proverbial kibosh on more elaborate ideas to physically transform the building.

Fortunately, a different kind of transformation plan would soon be in the works.

Since 2012, the building has been breathing new life as an event space, under the helm of Read and co-partner Patrick Donovan.

Hosting everything from Feast food festival and Secret Cinema to tattoo conventions, music events, wine fairs, and the BAFTA video-gaming awards, the venue has welcomed tens of thousands of visitors through its doors. Tobacco Dock Ltd aims to make the building the bustling hub it was in its heyday, albeit with a very new breed of industry.

In March, work started on bringing the building’s vaults back into full-time use as an entrepreneurial tech accelerator and co-working space that will be home to MassChallenge UK.

Tobacco Dock’s history might be chequered, but could its future as a tech hub give it a new legacy? Only time will tell. 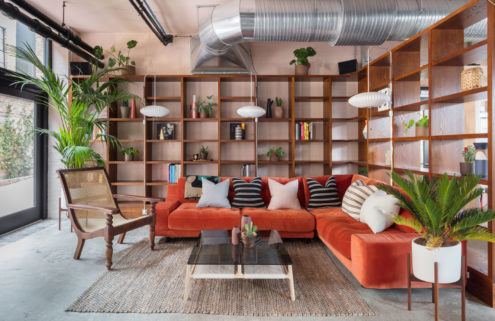