Interiors I by Alexander Hawkins

If you look for them, cities around the world are full of secret gardens and green spaces, many of which are unknown even to locals. New book Green Escapes explores these hidden courtyards, former industrial lands and reclaimed rooftops.

Garden historian Toby Musgrave calls them ‘an antidote to urban life’ in his introduction. ‘Small, intimate and peaceful, they are places where one feels at ease,’ he says. Often they are tucked away behind offices or busy tourist attractions, concealed from passers-by.

Here are seven hidden gardens you must visit in cities from London to San Francisco.

Founded in 1673, the Chelsea Physic Garden didn’t open to the public until 1983. It was established by the Worshipful Society of Apothecaries of London for the purposes of growing medicinal plants. Today, highlights include the glasshouses, garden of ethnobotany and one of Europe’s oldest rock gardens.

When the Federal Bureau of Prisons took control of Alcatraz in 1933, they were surprised to find hillside terraces, a rose garden and a greenhouse. The seven gardens were nurtured by inmates for years, but were abandoned after the prison closed in the 60s. These have since been restored, bringing the island back to life with fig trees, wildflowers and succulents.

The Garden Museum in London’s Lambeth celebrates the history and design of British gardens. The 2017 redevelopment saw the addition of the Sackler Garden, designed by Dan Pearson. The lush courtyard is a mix of trees, shrubs and perennials, and its centrepieces are the tombs of two famous horticulturists, both named John Tradescant.

Designed by Mexican architect Alberto Kalach, Biblioteca Vasconcelos is the largest – and perhaps most unusual – public library in Latin America. The nearby greenhouse is part of its surrounding botanical gardens. Occupying an abandoned factory, it hosts an array of native Mexican plants, divided into different sections.

This subtropical garden is one of New York’s many unexpected green spaces. Tucked away on Broadway, the atrium and its tiered garden terraces were originally planted by landscape architect Dan Kiley. The glass walls create an ideal environment for the tall trees, ferns and vines.

The interior of this ruined east London church, bombed in the Blitz of 1941, is now a beautiful garden. Its small but dramatic space has been totally transformed by wall shrubs, climbers, oleanders and palms. Designed by the City of London Architects and Parks Department in 1971, it went on to win a Landscape Heritage Award.

The Rail Park is Philadelphia’s answer to New York’s High Line. Studio Bryan Hanes have developed plans to slowly turn the 4.8kilometre stretch of abandoned railway into a greenway. Construction began in 2016 and the Rail Park will eventually be twice as long and wide as the High Line.

‘Green Escapes’ is out now, published via Phaidon

Read next: 7 of the world’s most spectacular sculpture gardens 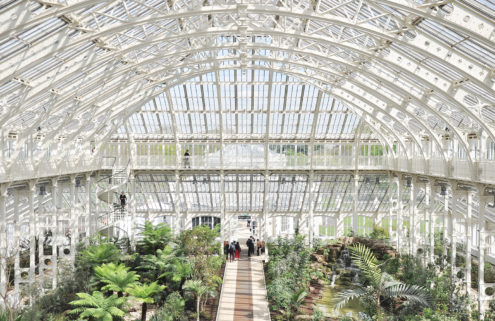