Property of the week: a remote Swedish cabin designed by AQ Arkitekter

Where to hide away

This Swedish cabin is hidden in a forest off the island of Gotland. Named Studio Furillen, it was completed in November 2010 by Andreas Forsberg of AQ Arkitekter as a modern home, complete with a gallery space, photography studio and spa.

Clad in weathered steel, the 500 sq m Swedish cabin sits on the Furillen peninsula and has no windows on its exterior walls. Instead, parts of its facade can be lowered to let light inside and create an outside terrace.

‘Minimal materials and an industrial facade structure create simplicity,’ says Forsberg. ‘The various hydraulic and mechanical terraces that can be raised or lowered allow the building to completely change character.’

Its rust coloured exterior also helps it to blend into the surrounding forest landscape, almost like a bird watcher’s hut. This is fitting given that the house sits within a nature reserve (once used for military operations during the Cold War.)

Inside, the Swedish cabin – on sale for 35 million SEK – flits between seclusion and openness, mimicking the flexibility of the villa’s shell. A series of intimate spaces for writing and reflection break up the creative retreat’s large open spaces.

There are four bedrooms, as well as a bright kitchen, which serves as the ‘hub’ of the house. Its atrium features an adjustable platform that can be adjusted to form a roof terrace at its highest point, or a patio at its lowest.

And if you get lonely, walk a little distance through the trees and you’ll come to a hotel and restaurant…

Read next: 6 cabins to rent this winter 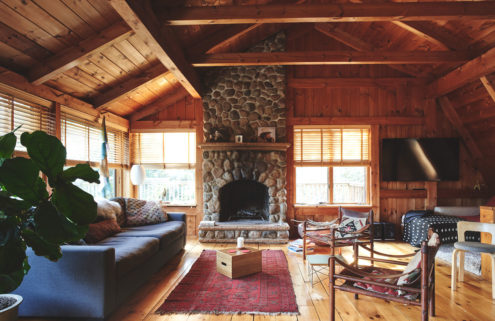