Property I by James Pallister

Could crowdfunding boost the quality of our homes?

Everyone should be able to live in a home they love.

That’s the thinking of Gus Zogolovitch, founder of peer-to-peer lending platform Crowdestates. ‘The problem is,’ he says, ‘with big housebuilders dominating the market, housing quality remains low and the supply is strangled.’

For many people, investing in property is simply inaccessible, which means that often the most innovative housing schemes get left on the drawing board. Zogolovitch aims to break that deadlock.

Crowdestates is the Kickstarter of the UK’s architecture and property world. It aims to bring together armchair investors with small-scale developers, offering good quality homes by enterprising architects.

‘Lots of architects themselves would like to act as developers’, says Zogolovitch. ‘But they have difficulty raising capital.’

Meanwhile, often those that do have the capital and would like to invest in property, are put off by the hassle that goes with the inevitable leaky boilers, house refurbishments – and finding a property in the first place.

This is where Crowdestates comes in. It showcases architectural projects that need investment alongside the predicted return. If investors like the look of a project, they can put their money where their mouth is, getting a return of between 6-10%.

Would-be developers get their schemes off the ground and as a result, Zogolovitch hopes, the aggregate quality of our housing stock improves.

‘The big problem in the housing market is lack of choice,’ he says. ‘‘The top 10 housebuilders used to build around 6% of our new homes in the late 1980s and now they build over 65%. Custom building puts the power of choice back into the hands of the consumer.

Choice is a given in most other consumer industries. ‘If we buy Nike shoes or Ray-Ban sunglasses, we can customise them,’ he adds. ‘Yet when it comes to the biggest purchase most of us will ever make, we have to put up with a limited chance to adapt it to our own lifestyle.’

Britain’s crowdfunding market is growing rapidly, and has more than doubled in size year-on-year from £267 million in 2012 to £666 million in 2013 to £1.74 billion in 2014. When it comes to the property arena, however, it lags behind the US, where crowdfunding has become a serious means of financing real estate deals.

Zogolovitch – along with other organisations like The House Crowd and Property Moose – aims to bring the UK up-to-speed with the US. He sees the rise of crowdfunding platforms, which cut out traditional lenders, as a transition that has already played out in other sectors. ‘Getting finance will change beyond recognition over the next few years,’ he says. ‘Just like the way we organise how we travel – when was the last time you used a travel agent? It will become much more common to use these systems because it’s so much more convenient,’ he adds.

Crowdestates work with developers to help tell the story of the development and do the due diligence service involved on the financial viability of a scheme. It takes a small cut of every transaction.

Zogolovitch predicts that many investors will be attracted by the idea of their money being used for good quality housing, rather than getting the best rate of return possible. ‘I think the crowd overall will support better quality products over smaller crappier ones. And therefore, overall as a society, we win. It will take time, but I think you will see a gradual move to support better quality projects’.

It’s difficult to argue with Zogolovitch’s prognosis – we need more homes built to a higher standard, using new business models. His solution, though still in its infancy, looks compelling.

Providing a more versatile means of financing projects could help end the dominance that major house builders hold over the UK’s housing market.

Perhaps crowd-funding platforms are just the tool we need to break this impasse. 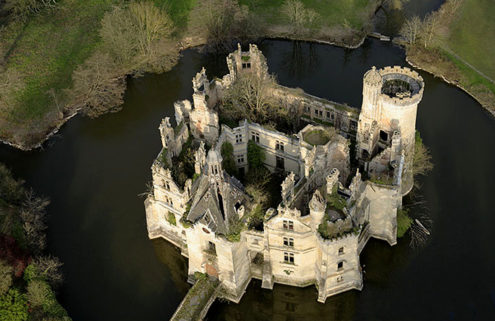 Nearly 9,000 strangers own this French chateau