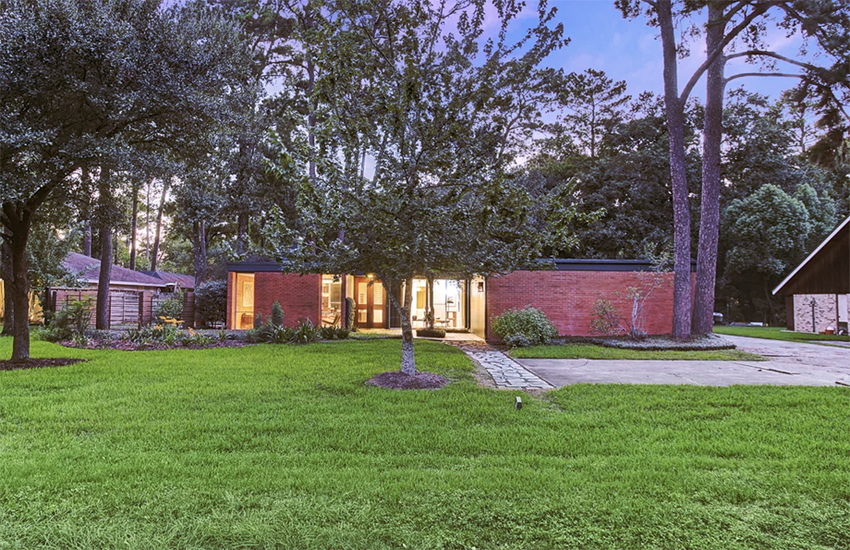 Welcome to our weekend property digest, where we bring together the best houses for sale (or rent) that we’ve unearthed across the world. Among this week’s discoveries is an island home with royal connections and a sculptural house in France by Marc Held.

4+ bedrooms; £1.25m via The Modern House
A converted barn forms the heart of this historic country estate, which includes a 16th-century farmhouse. Original wooden beams and flagstone floors are all intact, and the Suffolk property sits on 2-acres of land between the villages of Eye and Debenham. Peek inside.

2 bedrooms; $890,000 via Robert Searcy Properties
Houston-based architect Tom Mckittrick designed this midcentury modern property for himself in 1964, and it retains a cache of its original interiors. The kitchen featured in Better Homes & Gardens and has been faithfully maintained throughout the decades. A separate guest house was added in the 1970s and can be used as a studio space. See more.

4 bedrooms; €1.7m via  Espaces Atypiques
This futuristic home was designed by French architect Marc Held and perches over a pond in the commune of Gif-sur-Yvette. It is wrapped in an oxidised steel skin which helps it bed into its natural surrounds, while its interiors feature soaring 6-metre high latticed ceilings. Take a spin inside.

4 bedrooms; $4.5m via Core Real Estate
Pop Artist Roy Lichtenstein lived in this roomy Nomad apartment in the 1980s after he’d become a household name. The 3,200 sq ft New York property has 19 windows with views of the Flatiron District.

4 bedrooms; £625k via Biles & Co
The Grade II-listed Osborne Cottage was once home to Queen Victoria’s daughter, Princess Beatrice. As you would expect from royal digs, the island property is filled with grand features including a cantilevered staircase with elaborate metal scrollwork and an unusual circular sky lantern which floods the lobby with light. Take a closer look.