Peek inside its tranquil havens

London may have lost its Garden Bridge but now it’s got a ‘garden building’: the new Aga Khan Centre in King’s Cross, featuring a series of six courtyards, terraces and gardens inspired by Muslim societies around the world.

The Muslim educational hub is a white limestone beacon designed by Japanese architect Fumihiko Maki that will connect to a ‘ribbon’ of green spaces in the King’s Cross regeneration area when it fully opens on 22 September. Built as a centre for learning, cultural exchange and insight into Muslim cultures, the 10,000 sqm building is conceived as a calming sanctuary that – in an era of frayed relations – aims to reflect the Islamic values of ‘openness, dialogue and respect for pluralism’.

Said Prince Shah Karim Al Hussaini, Aga Khan IV, at the building’s unveiling this week: ‘From this new home, our education-oriented institutions will contribute powerfully to building new bridges of understanding across the gulfs of ignorance.’

Members of the public will be able to pass through the ground floor of the ten-storey Aga Khan Centre, take in an exhibition dedicated to Muslim cultures and wander through to King’s Cross’ neighbouring Jellicoe Gardens (when they open in 2020). The building’s own gardens – open to the public by appointment from 22 September – act as an ‘entry point into discovering and understanding the history and cultures of the Muslim world,’ says Matt Reid, CEO of the Aga Khan Foundation UK.

Among them is the Garden of Tranquility, overlooking the Jellicoe Gardens, which recalls covered loggias found in Persia and Egypt; the Courtyard of Harmony, with a hidden Arabic message embedded in its patterned marble flooring reading ‘harmony and beauty’; and two rooftop sanctuaries. The Garden of Light takes its cues from the Islamic courtyards of Andalusia in Spain, with a patterned façade that changes throughout the day, while the Garden of Life has water at its core, echoing the Kashmiri waterfalls of late Mughal gardens.

Two further gardens in the nearby Victoria Hall were completed by the Aga Khan Development Network in 2016.

While anyone can roam the building’s ground floor spaces, the Aga Khan Centre is designed chiefly for the academic community, providing a permanent base for The Institute of Ismaili Studies, the Aga Khan University Institute for the Study of Muslim Civilisations and the London branch of the Aga Khan Foundation. It holds offices, research and study spaces and library include rare books and manuscripts.

Maki & Associates took cues from the limestone bands around windows of industrial buildings in St Pancras when choosing the material palette for the building. ‘We noticed that the older the building is, the deeper the windows are set, so we decided to be modern and make them completely flush to the façade,’ says Gary Kamemoto, director of the practice. Meanwhile, cut outs in the walls create recesses for terraces.

Light is filtered into the Aga Khan Centre by an octagonal motif on the windows recalling an Islamic screen. At the building’s core is an atrium rising 39.5m high and capped by a glass roof.

The London building is the third by Maki & Associates for the Aga Khan, including the Delegation of the Ismaili Imamat in Ottawa and the Aga Khan Museum in Toronto.

Read next: The rise of the Turkish mega mosque 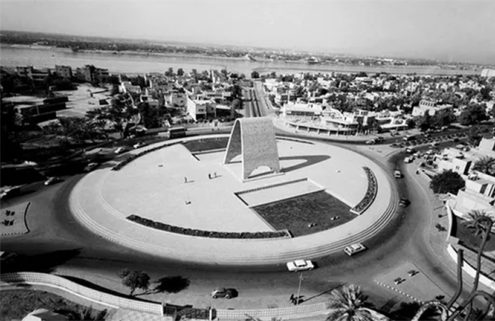 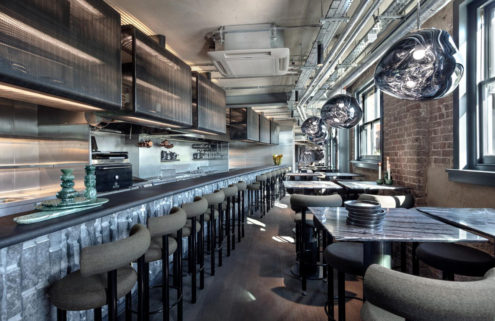