Louis Vuitton has opened the doors to the 19th-century family home of its eponymous founder, revealing a new private museum chronicling the fashion brand’s history.

Dubbed ‘La Galerie’, the exhibition space takes over a two-floor, 6,500 sq ft structure on the grounds of Vuitton’s historic residence in Asnières-sur-Seine, a northwestern suburb of Paris.

The Vuitton family moved out in 1964, but the fashion house’s archives and luggage ateliers remain today – housed in a series of glass and steel structures, inspired by the Eiffel Tower, that Vuitton commissioned following construction of his home in 1859.

For the permanent exhibition, curator Judith Clark delved into the fashion house’s archives of 165,000 documents and 23,000 objects, picking out just 400 pieces – organised thematically rather than chronologically – for display.

‘We wanted it to be perceived very much as a gallery intervention,’ Clark told WWD. ‘It’s like an installation reflecting on the idea of exhibiting the Vuitton archive. It’s intended to be kind of slightly disruptive in that way.’

Exhibits include clothes and accessories, rare luggage items and even a small-scale model of the Frank Gehry-designed Fondation Louis Vuitton, which opened last year.

Louis Vuitton’s ‘La Galerie’, inaugurated last Sunday, will only be open on weekends. 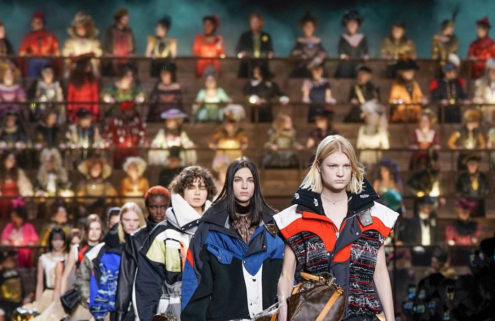