Architecture I by Darmon Richter

Georgia’s Soviet-era monuments: the towering titans of the past

Should they be saved?

The Monument to the Treaty of Georgievsk, by architect George Chakhava (1983), sits among the mountains near Gudauri and features interior mosaics created by artists Zurab Kapanadze, Zurab Lezhava and Nodar Malazoni. Photography: Darmon Richter

Throughout Georgia, the past overshadows the present. Cropping up everywhere from back-road village squares to mountain peaks, steel and concrete monuments survive as the legacy of a past many would rather forget.

The Georgian Soviet Socialist Republic existed as part of the USSR from 1936 until 1991, and during those years it built a phenomenal number of ideological monuments. In the years after WWII these largely took the form of Socialist-realist statues speaking to themes of Soviet historicism – stars, fists and Red Army soldiers – though by the 1970s and into the 1980s, this formalism would give way to new and often abstract works of Modernism.

Contemporary Georgia’s attitude towards this Soviet architectural heritage is characterised by contradiction. In the capital, Tbilisi – one of our ‘cities to watch in 2018‘ – tourists can visit the Museum of the Soviet Occupation, dedicated to the victims of 70 years of Soviet political repression. Just 50 miles down the highway though, the Joseph Stalin Museum at Gori has changed surprisingly little since it opened in the 1950s, and feels more like a shrine than it probably ought to.

The treatment of Georgia’s leftover Soviet monuments varies from city to city. The Monument to the Treaty of Georgievsk at Gudauri (informally known as the ‘Russia-Georgia Friendship Monument’), is in the process of being repaired. In the mining town of Chiatura, a hyper-proportioned Soviet memorial still looms over a complex of housing blocks. Many other rural and post-industrial towns seem similarly indifferent to their own local mementos. But not in Tbilisi.

Tbilisi is a city in the process of reinventing itself. Tourism is at a record high, while rapid new development is appearing, in part, by way of large-scale Chinese investment. Much of Tbilisi’s early 20th-century Art Nouveau architecture (previously condemned as ‘bourgeois’ by the Soviet regime) has enjoyed recent reassessment and repair, and in 2002 the World Monuments Fund added Georgian Art Nouveau to its list of endangered works.

Georgia’s Soviet-era monuments, conversely, were effectively outlawed in 2011 and a significant number have already been removed… including the monumental arches on what was once Republic Square, nicknamed ‘Andropov’s Ears,’ and whose 2005 demolition was presided over by Georgia’s President.

Not every monument built in Soviet Georgia was overtly political, and some succeed in outrunning those former associations: the Monument to Saint Nino (the ‘Enlightener of Georgia’), for example, or the ‘Chronicles of Georgia’ memorial complex, both designed by Zurab Tsereteli. Then there’s Kartlis Deda, the statue of Mother Georgia, an enduring symbol of nationhood with or without the context of her socialist sisters overseas.

In 21st century Tbilisi though – if not quite yet in all of Georgia – any Soviet-era monuments which can’t be rehabilitated as national symbols now increasingly face demolition, or obscurity and decay.

Read next:  Soviet architecture – how do we wrestle buildings from their political pasts? 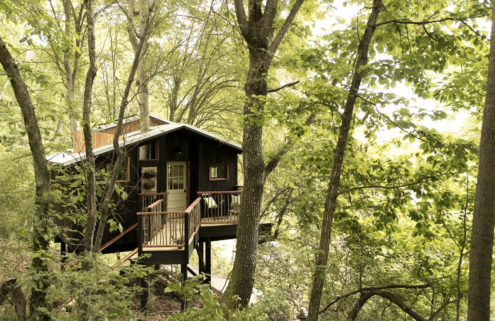 Autumnal cabins in the US where you can enjoy the colours