Looking to rent an architect-designed home? Interior architect Marta Nowicka has launched DOMstayandlive, a carefully curated selection of properties designed by herself and her peers.

DOM – which means ‘house’ in Polish (both her parents’ mother tongue) – is the culmination of Nowicka’s obsession with reviving old industrial buildings as new living spaces. It’s a practice she’s been honing since the 1990s, when she began buying vacant commercial structures to live in for herself, and later letting them out via Airbnb and other short-term letting sites.

‘I’m sentimental,’ says the award-winning interior architect. ‘I can’t part with them, having spent years developing them. They’re like extensions of the family.’

The website brings Nowicka’s arsenal of properties in the UK – and a smattering of other homes designed by her architect friends – in one curated space, with links off to the owners’ preferred booking channel.

‘I love converting industrial buildings – anything that’s a bit gritty and interesting,’ say the adaptive reuse maverick. ‘We’ve kept all the references to St John Ambulance, but incorporated a medical table, a cadaver table… there’s a clinicalness, but it’s very warm.’

There’s also a smattering of international holiday homes on the site, including a villa in the South of France and a beach house in Brazil.

Meanwhile DOM LIVE clusters longer-term London rental properties: offerings include apartments in a former Labour party HQ mansion block in Hoxton, an apartment on Old Street and Nowicka’s first flat in Archway. You can also get a glimpse of projects underway – soon to be available to rent… 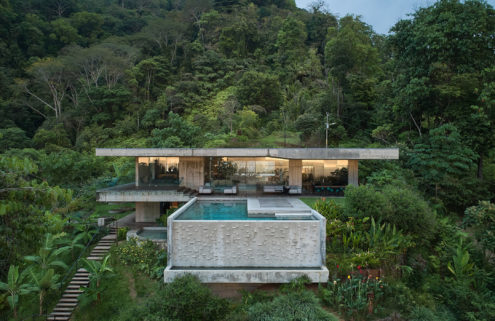