Cloud of uncertainty over restoration of Palmyra ruins in Syria

A Syrian heritage expert for the UN has cast doubt over whether ISIS’s destruction of the country’s ancient Palmyra site can be undone – despite initial optimism for restoring the 2,000-year-old ruins.

Over the weekend, Syrian forces reclaimed the UNESCO World Heritage Site from the Islamic State militant group, which has occupied it since May last year. Writing in The Guardian, Syrian antiquities chief Maamoun Abdulkarim was hopeful large parts of the Greco-Roman ruins, including its Temple of Bel, could be restored.

But Annie Sartre-Fauriat, part of a UNESCO Syrian heritage group, told Agence France Presse: ‘I am very doubtful about the capacity, even with international aid, of rebuilding the site at Palmyra.

‘When I hear that we are going to reconstruct the Temple of Bel, that seems illusory. We are not going to rebuild something that has been reduced to dust. Rebuild what? A new temple? I think there are probably other priorities in Syria before rebuilding ruins.’

According to Abdulkarim, the Islamic State destroyed the city’s medieval citadel, Temple of Baalshamin, Arch of Triumph and dozens of funeral towers. But its Agora, amphitheatre and the Temple of Bel’s walls and gate still remain on the site – part of the Silk Road trade route that linked the Roman empire to the rest of the world.

A conference looking into the heritage site’s reconstruction will take place by the end of April. 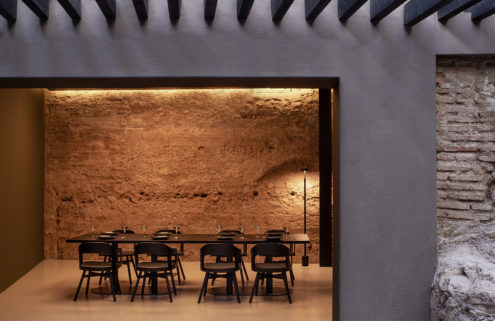 Exploring the crumbling monuments of Abkhazia