Architecture I by Siska Lyssens

B-ILD slots a garden pavilion into a 19th-century home

Connecting old and new in Brussels

B-ILD architects have inserted a steel box into the historic fabric of a 19th-century house in Brussels. Raised on a platform, this contemporary counterpoint is a response to an irksome subsidence issue – the house had sunk 15cm since construction, causing a disconnect between the building and the garden.

‘Our client wanted to improve this relationship,’ says Kelly Hendriks, co-founder of B-ILD. ‘Instead of redoing the whole house, we opted to add just one space. Our solution was to bring the erstwhile split-level kitchen and living area to an equal height.’

The steel pavilion and its pink concrete floor are raised on stilts, connected to the garden via stepped platforms. From the outside, it reads like part of the house, despite being a freestanding, raised structure. Its terracotta-hued flooring blends in with the surrounding bricks.

Inside, the plywood back wall hides functional storage space and the steel deck underside of the roof is exposed – its vertical indentations mirrored in the rippling of the linen curtains.

‘The pavilion is dedicated to enjoying the garden,’ says Hendriks. Her practice – established in Brussels in 2009 – aims to create clearly defined volumes for its smaller scaled projects and, in this case, set out to drastically depart from the traditional notion of a garden pavilion: a decorative, often octagonal structure with a pointed roof.

The result is a strikingly contemporary structure that both stands apart from its surrounds and nestles into its historic framework. 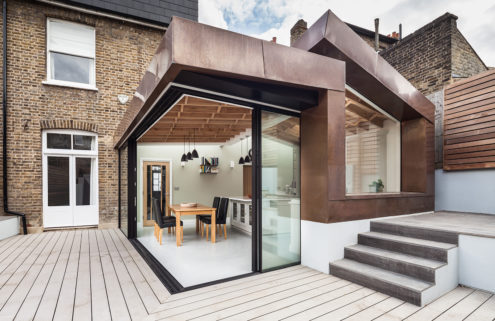 These are London’s most innovative extensions