‘A Clockwork Jerusalem’ explores the roots of British Modernism

Milton Keynes’ iconic concrete cows and an animated LED horse feature in an exhibition outlining Britain’s unique relationship with Modernist architecture, which has opened at the Architectural Association School of Architecture in London.

Architect Sam Jacob and Dutch design studio Crimson Architectural Historians curated an exhibition that explored the origins of Modernism in Britain and its role in shaping society over the past century, for better or worse.

‘We felt that the [Venice Biennale] brief was really interesting and provocative but that it focused too much on Modernism as an architectural style and we wanted instead to look at the soul of this movement,’ says Wouter Vanstiphout of Crimson Architectural Historians, speaking at the AA Gallery ahead of the exhibition’s opening this weekend.

Tracing the movement back to the early nineteenth century, when art and poetry such as William Blake’s ‘Jerusalem’ influenced socially motivated architects like William Morris, the show presents a diverse array of ephemera from popular culture alongside drawings, models and artworks, in order to demonstrate architecture’s reciprocal relationship with modern society.

‘Our argument is that the response to modernity starts much earlier in England than in the rest of Europe,’ explains Jacob. ‘Instead of focusing on Modernism with a capital “M”, the show looks at the unique British experience resulting from the early Industrial Revolution and the strange responses that occurred in architecture, planning, art and everyday life.’

Presented in collaboration with The Vinyl Factory, the exhibition has been remounted in the Architectural Association’s ground floor gallery and first floor cafe, with the concrete cows standing guard outside. ‘We’re happy to bring the exhibition to the AA,’ says Jacob, ‘because there are overlaps with this place and some of the architects whose work is included, like Derek Walker, Cedric Price and the Smithsons, so in a sense a lot of these ideas are coming home.’ 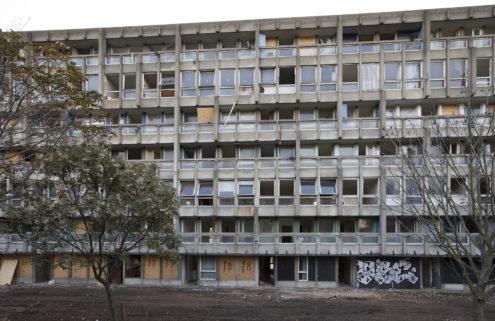