15 of Soho’s anchors and innovators

We chart the London neighbourhood’s ‘Spacemakers’ – the entrepreneurs, restaurateurs and creatives who make it what it is today

Hemingway, Parker, Fitzgerald; some of the 20th century’s greatest writers are known as much for their love of a good drink as for their novels. At The Society Club, Babette Kulik has married both. Of an evening, her cocktail-bar-cum-bookstore is a bustling hub where patrons include writers, artists, suits and locals of all ages – not to mention dogs.

Fabled for its all-day breakfasts and milky builders’ tea, family-run Bar Bruno is a timeless Soho stalwart. You can still find media-types rubbing shoulders over a fry-up with labourers and locals. It is packed to the rafters with punters from morning through to night.

To descend the stairs of St Moritz is to step back in time: the décor hasn’t changed much since the 1960s nor has the music, and on Thursday nights, rock ‘n’ roll pulses from speakers, spun by legendary selector Gaz Mayall. Established in 1980, Gaz’s Rockin’ Blues is the longest running one-nighter club in London, packing in a truly eclectic mix of rock ‘n’ roll genres from jumpin’ ska to RnB and steam punk.

An emporium of the out-there and the innovative, 19 Greek Street is a five-storey hub – helmed by Marc Peridis – celebrating experimental and sustainable design. Encompassing a furniture showroom, interior design studio, as well as workshops, the townhouse also plays host to an exhibition and talk program that promotes designers working on the cutting-edge of environmental upcycling.

Nick Jones redefined what a private members’ club could be 20 years ago when he opened the first Soho House on Greek Street, banning the bankers and offering the creative world a new place to work and play. His brand might now be a global phenomenon but he’s back where it all started: he’s currently restoring one of Soho’s finest Georgian townhouses, soon to open as Soho House Dean Street when the Greek Street space closes for refurbishment.

Nobody caters to the all-day grazer quite like Jorge Fernandez and Rick Wells, who’ve been keeping Soho’s hunger at bay since 2006 with their ‘shepherd’s knapsack’ treats: cured meats, sourdough bread, cheese and wine. Only the very finest produce will do for the duo, who quickly followed up their Lexington Street store-turned-bar with a coffee shop on Beak Street before expanding their empire across London.

Record-shops are dead, they said. It seems Simon Rigg never got the memo. Rigg quickly established Phonica as the place to buy emerging German pre-minimal sound records when he opened shop in 2003. Today, it is packed with customers perusing shelves brimming with experimental records – from hip hop to electronic, ambient and krautrock – or hanging out on beaten leather sofas, chatting to staff about the latest releases.

Today the Photographers’ Gallery on Ramillies Street is one of the best contemporary photography spaces in the world. Its success is due in large part to the efforts of its Sydney-born director, Brett Rogers, who’s tirelessly championed British photography, at home and abroad. Since moving to their new site – designed by O’Donnell + Tuomey – in 2013, they’ve turned ‘Piss Alley’ into new cultural destination.

Husband and wife hoteliers Kit and Tim Kemp have an empire that encompasses eight boutique hotels in the capital, and one in New York. Each of their spaces is marked with Kit’s signature design aesthetic, which gives a contemporary spin to classic British style. Ham Yard in Soho has an urban village feel and, in addition to the hotel’s 91 bedrooms and 24 apartments, there are 13 independent stores, a theatre, gym and a restaurant, making it far more than just a place to rest your head.

Today, Soho has mostly swapped carnal pleasures for the culinary kind, and restaurateur Russell Norman has been leading the charge. He and business partner Richard Beatty’s Polpo Group opened their first restaurant on Beak Street back in 2009, quickly earning local affections with their Italian small-plates that always hit the spot. Now they have four restaurants in the neighbourhood and outposts in Covent Garden, Smithfield and Notting Hill.

Brewer Street Car Park might be Grade II-listed, but it’s no relic. Hosting regular music and arts events from The Vinyl Factory – including the recent launch of creative director, artist and music producer Trevor Jackson’s LP, F O R M A T – the car park’s an emerging and progressive cultural hub. Currently on show is international artist-composer Ryoji Ikeda’s immersive Supersymmetry installation (running until 23 May), which will be swiftly followed by the work of Carsten Nicolai in June.

The Groucho Club has become something of an institution since opening its doors in 1985. Originally conceived as an alternative to the ‘stuffy gentleman’s clubs’ of the 1980s, 30 years on, it’s still serving members from the worlds of art, publishing, music, film and advertising.

Like The Groucho, Andrew Edmunds has been a fixture of the Soho scene for nearly 30 years. His eponymous bistro on Lexington Street is always bustling at lunchtimes, with a menu of seasonal staples such as Welsh rarebit and devilled lamb’s kidneys and toast. The restaurant occupies two floors of the Georgian townhouse, topped by one of Soho’s best kept secrets – Mandana Ruane’s writers’ club, The Academy – on the third.

Traders have been selling their wares from barrows along Berwick Street since the 1770s. Known for its rag trade, music stores, and restaurants, it remains one of Soho’s most bustling thoroughfares despite the din of surrounding construction-work. Major changes are underway to street – the cobbles are being upgraded and Kemp House is be renovated, along with surrounding retail units – that will change its fabric forever, for better or for worse. Last month, this stretch of Soho also welcomed a new addition: Alan Yau’s new Chinese gastropub, Duck & Rice, just around the corner from his Michelin starred restaurant Yauatcha.

Mark Powell was one of the first to bridge classic Savile Row tailoring and contemporary street style. Since opening his very first store in 1985 selling vintage 1940s suits, the British designer has gone on to dress everyone from the infamous Krays to Naomi Campbell with his bespoke wares. 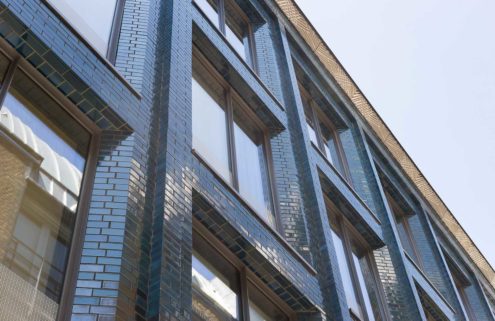 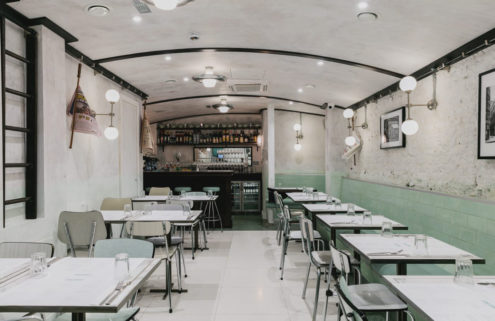