Interiors I by Jennifer Conlin

15 of Midtown Detroit’s anchors and innovators

Writer Jennifer Conlin charts the neighbourhood’s ‘Spacemakers’ – the entrepreneurs, restaurateurs and creatives who make it what it is today

In the late 1990s, Detroit’s Cass Corridor was considered one of the poorest, most crime-ridden areas in the USA, with 300 people sleeping in tents in one patch of the neighbourhood.

Today, the Cass Corridor has been renamed ‘Midtown,’ and its transformation is held up city-wide as a post-auto industry template for how small business owners can jump start even the most troubled neighbourhoods. Last year alone, 74 new businesses opened or signed leases in Midtown, making it a destination for visitors, but a concern for long-term residents, worried rent increases might force them out.

As Midtown continues to develop, we look at the anchors and innovators who have shaped the neighbourhood.

Avalon International Breads opened in 1997 in a space that had nothing but one light bulb, a pipe, some plywood doors and no windows. It soon became (as it remains to this day), a warm, rustic café/bakery, where friends and strangers sit together to enjoy one of their frothy coffees or loaves of organic bread, along with an array of sweets, soups and sandwiches.

The Dell Pryor Gallery – opened in the 1990s by Ms Pryor, who is now in her eighties – has always sold the work of local artists. Pushed out of two other neighbourhoods by developers, she now shares her space with Tulani Rose, the name of her daughter, Sharon’s, gift shop. The store was once a jazz club, which Ms Pryor frequented in her youth.

Goodwells Natural Food Market. You have to try their Famous Vegetarin Pocket Sandwich. I get it with Cheese and Avocado and it's great! #goodwellsnaturalfoodmarket #goodwellsmarket #goodwells #detroit #vegetarian #natural

Goodwells Natural Foods Market is the neighbourhood ‘go to’ spot for vegetarians and those in search of healthy food. Famous for their ‘Pocket Sandwich’ – a soy patty with spinach leaves, alfalfa sprouts, tomato and cucumber, and an original tofu sauce, all wrapped tightly into a whole wheat pita – it goes well with one of their fresh soups.

Shinola specialises in watches, bicycles, and leather goods. Created by Fossil-founder Tom Kartsotis and opened in 2013, Shinola immediately made the neighbourhood a destination for both tourists and suburbanites. They now have stores all over the world, but this remains their flagship store, where ‘Made in Detroit’ watches retail for between $475 and $995 and the company’s bicycles are in the $1,950 and $2,950 range.

Motor City Brewing Works is Detroit’s oldest operating brewery. Opened in 1994, it produces hand-crafted, superior quality beer in equipment salvaged from the city. Serving pale ales, nut brown ales, and even pumpkin ale, there is something for every beer drinker…including stouts.

So many great #cards in stock right now! #sendmoremail #snailmail A photo posted by citybirddetroit (@citybirddetroit) on Sep 30, 2015 at 10:32am PDT

Brother and sister Andy and Emily Linn are the team behind gift store City Bird. Featuring the works of local artists, their shelves are stocked with Great Lakes-themed houseware items, jewellery, stationery, t-shirts, and much more.

The Majestic Theater Center boasts live music acts, a bar, and even a bowling alley. Dating back to 1915, the building is on the National register of historic places and was once the largest movie theatre in the world, with 1,651 seats.

9. The Inn on Ferry Street

Going up. Detail of main staircase in #owenhouse. 1 of our 6 beautiful #victorian homes for you to call your own(for a few nights at least) check out our website for packages www.theinnonferrystreet.com. #detroit #architecture #details#historichotels

The Inn on Ferry Street is more of a historic complex than an inn. Consisting of four restored Victorian homes and two period carriage houses, it is easily the most charming place to stay in the entire city. Thankfully, it also has all the comforts of a modern hotel.

Fashion designer Felicia Patrick opened the doors to Flo Boutique in Midtown 15 years ago. Her clothing is eclectic and original and cannot be found anywhere else, thanks to her keen buyer’s eye, which includes supporting local artists. You’ll find rails filled with willowy blouses, fitted jackets, leather goods, jewellery, hats, shoes and bags, and soon, pieces from her own line.

For your Spanish Tapas fix, head to La Feria, a restaurant that opened a few years ago after winning startup business contest, Hatch Detroit, and scoring $50 K in seed money. On summer days the restaurant is packed with patrons drinking sangria, and during the winter, they can cozy up with a bottle of Rioja and a plate of fried eggplant, with honey and seared shrimp in garlic.

Walking into Hugh is like stepping onto the set of Madmen. The store sells ‘classic bachelor-pad style’ products such as vintage martini shakers, mid-century furniture, ashtrays and glassware. They, too, got started thanks to Hatch Detroit.

Sneak peek of the new #Motown float for #Detroit's Thanksgiving Day Parade (which just so happens to be our 18th birthday). Thanks to @historicdetroit for the photo.

Pure Detroit, around since 1998, was one of the first retail stores to celebrate Detroit during a time when few others were doing so – by creating and selling products made in the city. Located in the Fisher Building in Midtown, they also have two other historic locations in the city.

Check out our new digs! Today our Detroit store moved one door over to our new bi-level space with a built-in bar. We'll be toasting with @twojamesspirits tonight from 6-8 pm. Our new home conveniently has the same address, 441 West Canfield. See you soon!

Willys Detroit is the sleek sister store of Shinola. It opened its doors last year, selling everything from apothecary lotions and potions to designer apparel and smelly candles.

Someone take me back here ✨☕️?? customer service was par, the beans & vibes were all good #Detroit #GreatLakesCoffee #Coffee #CoffeeConnoisseur

Founded by Greg and Lisa Miracle in 1994, The Great Lakes Coffee Roasting Company now boasts a café in Midtown. A popular spot for socialising and working, it serves organic coffee for those intensely conducting meetings (it’s been roasting since 1999) and local beers and imported wine for those who want to party. 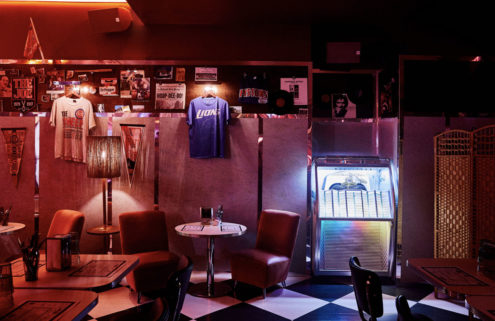