7 of the world’s most spectacular sculpture gardens

Gardening is a long term job. For those creating art gardens, it can be a life’s work. To build on a monumental scale requires time, money and dedication, something shared by the creators of these seven extraordinary sculpture gardens. Each is the work of a unique creative vision – be it the ‘Surrealist Xanadu’ conjured by Edward James in the Mexican rainforest; the vibrant, voluptuous forms of Niki de Saint Phalle’s ‘nanas’ in Tuscany; or the plot of political planting by Ian Hamilton Finlay in the wilds of Scotland.

Each of these sculpture gardens is different, but behind every one is an obsessive artist trying to fold nature and art into a singular vision of the world, uprooting assumptions about what a garden should be.

Filled with strange, mosaiced beasts, tree-shaped bird nests and ornate colonnades, Antoní Gaudi’s Park Güell was originally intended to be a municipal housing project for the wealthy, far from the factory smog. But when the first two houses were built and neither found a buyer (except Gaudí himself, who lived in one until 1926), the housing plan was abandoned and the park was eventually bought by the city and transformed into a municipal garden.

Edward James was a friend and patron to René Magritte, Salvador Dalí and Leonora Carrington, and the owner of the greatest Surrealist art collections of the 20th century – which he sold to fund the sublime garden of Las Pozas. Situated north of Mexico City, Las Pozas covers more than 80 acres of rainforest, comprising towering sculptures, pavilions and concrete structures interlaced with walkways, bridges, pools and waterfalls. The project – which James called his ‘Surrealist Xanadu’  – took more than 35 years to complete, cost more than $5m and involved more than 150 employees. Wandering its walkways into The House on Three Floors Which Will in Fact Have Five or Four or Six, through doors that lead nowhere, past concrete flowers and up spiral staircases into the sky is the closest one can get to living inside a Surrealist painting.

The Gardens of Bomarzo in Lazio, Italy

Sculpture gardens are not the exclusive purview of the modern era. In Bomarzo, north of Rome, sits one of the more eccentric creations of the 16th century, known today as The Park of the Monsters. Commissioned by the wealthy condottiero and art patron Pier Francesco Orsini, and designed by architect Pirro Ligorio, it is a bizarre collection of grotesque statues and architectural follies set in a wooded valley below the castle of Orsini. The park was a means for Orsini to cope with the death of his beloved wife, hence the statues which are astonishing rather than pleasing, and are positioned seemingly at random, perhaps to signify his mind disordered by grief. For many years, the gardens lay forgotten and overgrown, but in the 1950s, Salvador Dalí made a short film about the park, and the subsequent interest saw it restored.

‘I wanted to create a sort of joyland,’ Niki de Saint Phalle said, ‘where you could have a new kind of life that would just be free.’ In the Tarot Garden, which was partly inspired by Gaudí’s Park Güell, she brought her dream to life – a sculpture park made up of 22 monumental figures, each representing one of the mysteries of the Tarot deck. Vividly coloured, built from reinforced concrete and covered in mosaics and mirror shards, the ‘nanas’ are voluptuous, feminine and large enough to be walked through, clambered over, even lived in – Saint Phalle occupied the breasts of The Empress sculpture for several months during the garden’s construction. She said, ‘I think that I made them so large so that men would look very small next to them.

Chandigarh, Le Corbusier’s Modernist architectural utopia in India, is an unlikely place to find a sprawling garden filled with artworks fashioned from rocks, broken crockery, concrete and coloured stones. However, it was here that Nek Chand, a humble road inspector, started collecting discarded materials and transforming them into sculptures and statues depicting both traditional Indian life and fantasy landscapes. He worked in secret for a decade, as he was building illegally on protected land, but when the authorities discovered his miniature kingdom in 1975, rather than destroying it, they gave him a salary and a workforce of 50 to continue his garden. Today the Rock Garden spreads across 25 acres, features several thousand sculptures set in large mosaic courtyards linked by walled paths and deep gorges, and is visited by 5,000 people a day.

The Rock Garden of Chandigarh, Sector No 1. Chandigarh (UT) India

Deep in the Pentland Hills south of Edinburgh is the small garden filled with the works of the great artist and self-described ‘avant gardener’ Ian Hamilton Finlay. For 40 years, until his death in 2006, Hamilton Finlay sculpted and transformed the five acres that surrounded the farmhouse, creating more than 270 pieces of concrete poetry, polemic aphorisms in stone, sculptures and temples, referencing Greek and Roman mythology, the philosophy of the French Revolution and his personal wrangles with the horticultural authorities in Edinburgh, the enemy ‘Athens’ to his plucky Sparta. Indeed, he described his garden as ‘not so much of a retreat as an attack’, asserting the power of planting to make a political point.

The Hill of Witches near Juodkrantė, Lithuania

Hidden in the woods near the town of Juodkrantė in Lithuania there is an unusual sculpture park, one that has its roots in the deep rooted mysticism and fears of the local community. Despite being formally founded in 1979, the Hill of Witches or Raganų kalnas, has had its name for years thanks to the pagan celebrations that take place annually on Midsummer Eve. The sculptures and carvings, which are hand-crafted by local artists and represent characters from folk stories and pagan legends, are placed there as offerings to the witches and spirits believed to live in the woods, and are now becoming a popular local tourist attraction. 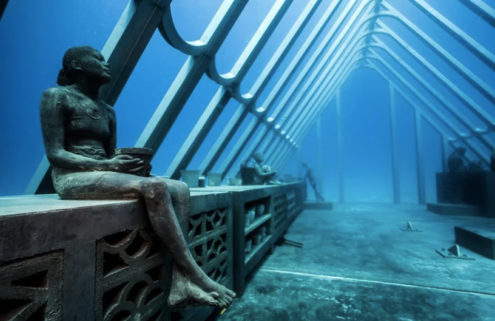 Australia is opening a museum inside the Great Barrier Reef