Winners announced for ‘A Folly For London’

There are few limits to the public’s imagination when it comes to designing London bridges – judging by winners of ‘A Folly For London’, a satirical design competition.

Set up by Garden Bridge opponents, the competition invited ‘absurd’ ideas for the plot, designated as the site for Thomas Heatherwick’s £175 million design.

Judges Natalie Bennett, leader of the Green Party, and design writer Owen Hatherley picked architecture student Ben Weir’s ‘Green Fire of London’ as the overall winner for its ‘punchy satire’ and ‘playful way of dealing with what architecture is’.

Weir proposed an eternal flame, fuelled by trees removed from London’s parks. The green space on the South Bank would in turn become a storage site for cranes and loading equipment for other developments.

Other ideas among the competition’s 50 entries included a roller coaster, a UFO crash site and a giant TV that mostly shows adverts.

Artist Will Jennings conceived ‘A Folly For London’ as a way to inform the public on issues surrounding the Garden Bridge.

‘The bridge itself is the tip of the iceberg,’ he said. ‘There’s the issue of the privatisation of our cities, environmental issues, heritage issues, and then the notion of public consultation – or lack of, in this case.’

The Garden Bridge Trust – the body responsible for the project – refused to issue a response to the competition.

An exhibition of ‘A Folly For London’ entries at St John’s Church in Waterloo will launch tomorrow, running until 4 October. 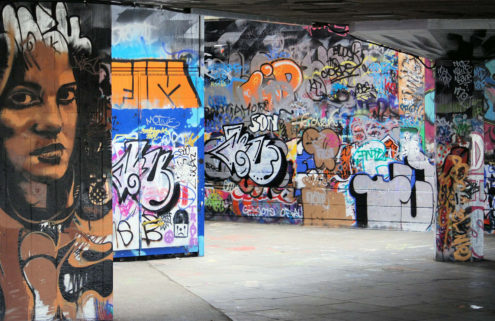