The seed for photographer Toby Coulson‘s project, Divided, was planted five years ago while he was taking a short-cut through a housing estate in Cornwall.

Heading to a surf spot nearby, he became fascinated with the streetscapes of the post-war enclaves he encountered and the subtle ways people sought to differentiate their ‘cookie-cutter’ bungalows from their neighbours’. ‘Fifty years after these uniform estates were built, human individuality has begun to take over,’ he says.

Since then, he’s shot dozens of Britain’s coastal bungalow estates as he seeks to decipher the hidden messages communicated through their garden greenery.

We spoke to him to find out more…

What was it about bungalow estates that first caught your eye?

Toby Coulson: Initially, I was intrigued by the way people tried to create privacy through building these divisions and ‘forts’ of hedges and bushes around their homes. It seemed to me like they were trying to shut themselves away from the community they were living in, deliberately isolating themselves among forced ‘close-living’.

The hedges symbolise ‘escape’ from the generic landscape of the estate. They’re also an assertion of individuality.

How has the project evolved?

I started taking a few pictures and quickly became obsessed with documenting them, setting off on drives across the area to find new estates. As the series has developed, I’ve started to see the hedges more and more as forms of expression. I l began noticing the ways in which people lovingly shaped and sculpted them.

Which image encapsulates the project for you?

The third image in the series (above): it’s almost as if the smooth bonnet of the car has influenced the way the rounded bush has been trimmed. The straight lines of the house are mirrored by those of the hedge in front of it. It’s a very human landscape influenced by the buildings around it. 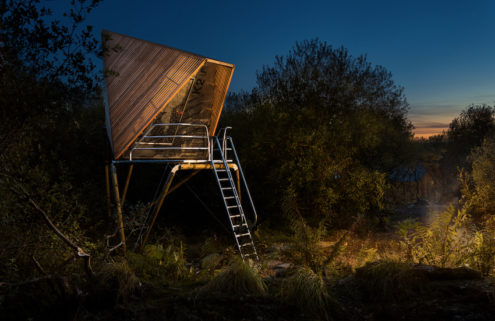