Property of the week: A Star Wars-esque home in the Australian bush

It may look like a spaceship has landed in the Australian bush but this futuristic property was actually inspired by a stamp.

Alkira House was built for retired philatelic dealer Rod Perry in 2009 and pays homage to his two loves in life: his stamp collection and his wife.

At the core of the building is a plunge pool shaped like indigenous Australian Gwoya Jungarai’s profile, as featured on the One Pound Jimmy stamp. Meanwhile, the layout bears the influence of Perry’s wife: ‘My other half is of Asian descent and is very much into feng shui,’ he says of the property, which ‘floats’ above a man-made lake like a lotus flower. ‘The place is perfectly situated to fit with that discipline.’

The house – designed by architect Charles Wright – sits within 73 acres of Queensland’s Wet Tropics World Heritage rainforest, a stone’s throw from the beach and the Great Barrier Reef.

Its living spaces and six bedrooms peel off from its core like petals, while the building’s perforated exterior walls recall stamp sheets.

Perry claims he didn’t notice the AIA award-winning property’s resemblance to a spaceship until he saw aerial photographs. ‘It’s often called Starship Galactica and quite rightly so,’ he admits.

More ‘postal wars’ than Star Wars, Alkira is still light years ahead of other properties in the area for its smart home and carbon-neutral technologies.

The house has been built from concrete, whose thermal properties help keep the structure cool in an area where the average temperature is 27 degrees celsius. And the cantilevered roof channels rainwater into a 250,000 litre in-ground water tank, while solar panels generate electricity.

You’ll need deep pockets for this Queensland starship: Alkira House is on the market for $15m AUD via Raine & Horne. 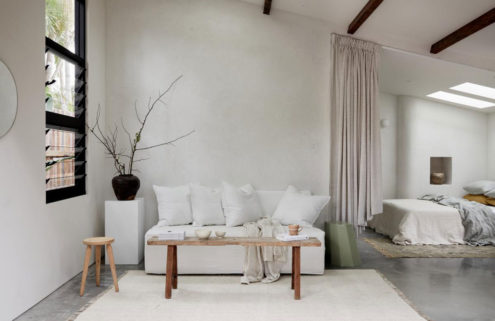