Paris Fashion Week: 11 of the best sets from the S/S 2017 womenswear shows

From a data centre to a building site

After Milan’s many high octane offerings, Paris seemed rather muted in the set design department. The headlines were centred around the debuts – YSL and Dior had new designers at the helm – and that blogger backlash, but the schedule still had enough variety to send the fashion crowd whizzing round the arrondissements, and to provide some stunning moments. Here we present the highlights of the final week of S/S 2017.

In a logical step for an industry still making sense of the digital world, Karl Lagerfeld channeled Silicon Valley for SS17. The Grand Palais was transformed into Data Centre Chanel: a metal cage glittered under the glass ceiling while a chaos of multi-coloured wires echoed the weave in the signature boucle suits.

Simon Porte’s designs dare to tread the delicate line between whimsy and chic, and his latest show was another masterclass. Recalling the Provençal countryside of his childhood, the collection riffed on classic rural costume – romantic volume, broderie anglaise, straw hats – and the dramatic set by Bureau Betak evoked the countryside with an undulating runway and gleaming light bulb sun.

Anthony Vaccarello’s debut for Saint Laurent was staged on Paris’s Left Bank, amid the artfully-styled rubble of what will become the house’s new headquarters. Rather in the manner of Saint Laurent itself, the location has had a number of previous identities, a monastery, an armoury and abandoned building site. To herald the building’s latest incarnation as well as to welcome the new designer at the helm, guests were welcomed to the site by an enormous YSL logo hanging from a crane.

Guests entered the Dries Van Noten showspace to a faintly sinister soundtrack of cracking ice. Botanical artist Azuma Makoto had frozen vast bunches of exotic flowers into five-foot blocks of illuminated ice that were melting in the heat of the room. With the rest of the space plunged into gloom, models walked through the puddles, the signature floral prints on their garments echoing the dark beauty of their surroundings.

Jonathan Anderson’s latest collection for Loewe asked the question, ‘what is modern living today?’ The answer was a chic, minimalist set starring what Vogue called ‘totems of good taste’, with Magali Reus’s short film Offshore projected on the walls. Ceramics by Edmund de Waal and textiles by Peter Collingwood dotted the room, creating a temperate climate for the series of thoughtful, elegant garments that emerged.

Maria Grazia Chiuri is the first female creative director in Dior’s history and this was her first solo show since ending her fruitful, three-decade-long partnership with Pierpaolo Piccioli (who stays at Valentino). The set by Bureau Betak was an exercise in determined simplicity – benches and runway crafted from stripped back wooden planks – that left space for a collection that spoke of revolution and feminism.

There were trapezoid forms both stenciled on the clothes and strewn across the floor of the Bercy concert hall for the Issey Miyake show. Models navigated an otherwise plain white circular space, walking to the unique strains of kazoo and synth played by Japanese musicians Open Reel Ensemble.

Dan Graham created a version of his famous artwork ‘Groovy Spiral’ for Phoebe Philo’s show. The curved confection of mirrors and frosted glass sent models weaving through the space, periodically reflected and obscured from view. Philo said, ‘I wanted to see (the collection) cast through the kaleidoscope of Dan’s installation. The fact that people can see themselves and the clothes makes for more complex reflections.’

Sarah Burton returned to Scotland this season, always a rich source of inspiration for McQueen himself. This time it was the ruggedly beautiful landscape of the Shetland Islands, evoked in L’Orangerie du Sénat by a runway piled high with Taatit rugs, blankets pieced together from fabrics handmade by the families of bride and groom and traditionally given as wedding gifts.

Part of Rei Kawakubo’s pre-eminence as a designer lies in her ability to translate very human ideas into extraordinary, esoteric clothes. Her latest collection was presented in Paris on a simple elevated white crescent, which allowed space for the dramatic creations to come alive.

As with last season, Riccardo Tisci presented Givenchy en plein air, this time in the gardens of the Museum of Modern History. His models paraded down a mirrored catwalk lit by oversized white globes, while his audience kept warm throughout by draping themselves in silver Mylar blankets left on their seats.

Read next: 9 of the best sets from Milan SS2017 womenswear shows 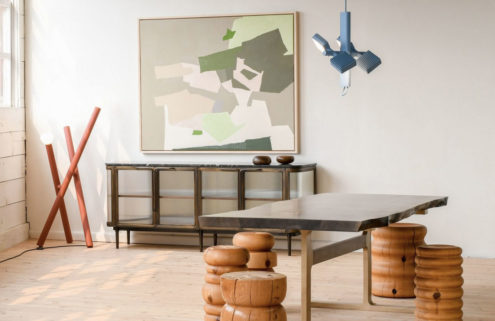