London Festival of Architecture: 11 events not to miss

London Festival of Architecture erupts across the city on 1 June, with more than 400 events exploring the theme of ‘identity’. Among them is a cartoon house by artist Richard Woods, a photographic exploration of Europe’s concrete utopias, and a string of high-profile talks with the industry’s movers and shakers.

Can’t make it to them all? We’ve picked out 11 events not to miss. And while you’re walking the streets of London, tune in to Musicity – a month-long streaming of music inspired by buildings and neighbourhoods across the capital.

Modernism didn’t just influence the built world, it also cast its spell over the cinematic realm too. This exhibition at the Estorick Collection of Modern Italian Art delves into the little-known period of Italian cinema where the sharp geometry and clean lines of Rationalism made their way into the sets of inter-war rom-coms and dramas.
39a Canonbury Square, London N1 2AN

The London Festival of Architecture is turning eyes westwards, planting a pop up pavilion beside Shepherd’s Bush Market. Sitting amid The Old Laundry Yard, the glowing, elevated structure – designed by Neil Davies Architects – is an abstraction of containers, and will be hung with fabrics referencing the wares in market. Gigs in collaboration with Bush Hall and performances in partnership with Bush Theatre will be held below it.
Old Laundry Yard, 14 Market Lane, off Goldhawk Road, London W12 8EZ

Artist Richard Woods will be ditching one of his colourful, large-scale model houses in a Hoxton skip for LFA. The receptacle in question is actually roving art space SKIP Gallery, and the home – dubbed ‘Upgrade’ – rifs on the ‘Holiday Homes’ Woods created for the 2017 Folkestone Triennial, this time raising questions about gentrification and a building’s relationship to its site.
Hoxton Square, London N1 6PB

Are Europe’s post-war social housing estates Modernist utopias or architectural hells? Photographer Iñigo Bujedo-Aguirre turns his lens on the high-rise concrete typology that is enjoying new popularity, yet continues to provoke reaction more than 70 years after taking root on the continent.
KPF at 7a Langley Street, London WC2H 9JA

The NLA is dedicating its annual lecture to Amanda Levete, the RIBA Stirling Prize-winning architect. Her practice AL_A is behind the partially underground Exhibition Road Quarter at the V&A and the sweeping curves of the MAAT in Lisbon.
6:30pm at Ondaatje Theatre, Royal Geographical Society, 1 Kensington Gore, London SW7 2SR

From the Golden Gate to the Forth, bridges can define a city and its ambitions. Designed to connect and move people, as well as provide a sense of place, they are among the most high performing and elaborate architectural additions to the urban landscape. Hanif Kara of AKT II and Martin Knight of Knight Architects will discuss this relationship at the freshly completed lifting bridge at Merchant Square in Paddington.
6:30pm at The Pavilion @ Merchant Square, Harbet Road, W2 1AJ

7 June
Eric Parry: From spires to towers – the politics of the skyline
Event type: talk

St Brides has enlisted Eric Parry to deliver its annual Wren Talk, and this year’s hot topic is London’s shifting skyline. The city is undergoing a burst of building activity, with a proliferation of skyscrapers springing up across the capital. Parry will pick apart the politics of this changing landscape.
7pm at St Bride’s, Fleet Street, London EC4Y 8AU

8 June
The role of the ancient in inspiring the modern
Event type: talk

Is there such a thing as a new idea? Panelists including artists Grayson Perry, Daniel Silver, Sokari Douglas Camp and Professor Liz Prettejohn discuss the role of the classical in shaping the contemporary, setting their works against the ancient objects and cultures that inspired them.
6:30pm at British Museum Great Russell Street London WC1B

The Japanese architect, known for his diaphanous, stacked structures, will discuss his philosophy of designing buildings that connect with nature at the brand new Japan House London on High Street Kensington. The talk precedes his exhibition of the same name – opening on 22 June in the building – exploring Sou Fujimoto’s completed projects and experiments for the future.
6:30pm at 224-238 Kensington High St, Kensington, London W8 6AG

It’s not summer until the Serpentine Galleries reveals its annual pavilion commission. This year, young Mexican architect Frida Escobedo has designed an enclosed courtyard pavilion, with lattice walls inspired by a celosia – a traditional Mexican way of filtering light and air into a house. The temporary pavilion will act as a stage for events and talks throughout the summer months, including a conversation between Escobedo and fellow architects Mohsen Mostafavi and Marina Otero Verzier, and Serpentine’s artistic director Hans Ulrich Obrist on 12 June.
Kensington Gardens, London W2 3XA

Avid design collector and writer Peter Kapos is opening up his Highgate treasure trove to the public. Stepping through the doors of his home in Highgate Newtown Stage 1 – a Modernist housing scheme – they’ll find rare examples of Dieter Rams’ 1960s creations, including seating tables, storage and audio systems. The kitchen itself is built from elements from Rams’ first design for Vitsœ.
46 Stoneleigh Terrace, London N19 5TZ

Read next: How the 2018 Venice Architecture Biennale celebrates the unfinished and the improvised 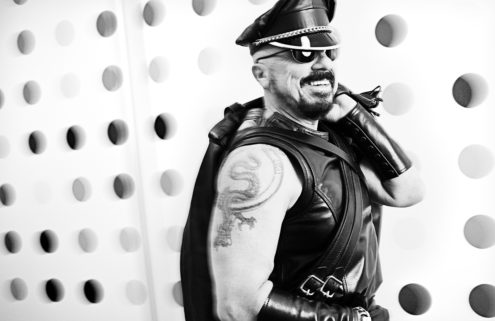 Architects' quotes of the year

Homes we missed: a designer's Uruguayan ranch, a curvy Victorian house and more

London Festival of Architecture 2016: 11 events not to miss