London Design Festival: 10 shows that will make you see the capital in a new light

While most of the London Design Festival is a showcase of products and furniture, there are a number of installations – casting new light on the city – that promise to make even locals see the capital’s buildings and spaces with fresh eyes.

Here we pull together 10 of the best.

As part of Somerset House’s Ten Designers in the West Wing, Faye Toogood will uproot a derelict country house and plant it in the heart of the city. Charcoal sketches evoking the house’s dilapidated interior will line the walls of the space, furnished with Toogood’s Roly-Poly collection remodelled in charcoal-coloured fibreglass, a hand-woven rug and ‘stray’ origami chickens and ducks.

The Tower of Babel

Barnaby Barford cycled over 1,000 miles, photographing shop facades in every London postcode to create 3,000 bone-china shops for his 6.5m Tower of Babel installation in the V&A. The artist says the piece is both a celebration of London’s trading history and a commentary on its population’s transformation from citizens into consumers.

Carl Turner Architects has created a home from two shipping containers. ‘The use of shipping containers is a proven method for quickly constructing durable, adaptable buildings around the world,’ says the team. ‘However, it has not been seriously applied to how the London housing crisis calls for faster, more flexible solutions to inhabit under-used land.’

Better Bankside has commissioned EXYZT, Adam Frank and Morgan Silk to transform a busy Southwark Street – which can be a barrier to people exploring the neighbourhood – into an ‘Avenue of Art’, by taking it out of the gallery and onto the streets. ‘We want to make Bankside a better place to live, work and visit,’ says chairman Donald Hyslop.

An audio installation in Made.com’s Soho showroom explores the changing meaning of the home. ‘I grew up in 17 homes in five countries,’ explains artist Haeyoun Kim. ‘Memories attached to each house melted together and got lost.’ To capture these memories, Kim translates user-interaction with domestic spaces into a melody, amassing a layered soundtrack of different dwellings over time.

2MZ has collaborated with the Black Cultural Archives to transform the heritage centre’s courtyard in celebration of Black Georgians, a forthcoming exhibition challenging preconceptions of the black community in Georgian Britain. ‘Brixton is a vibrant place, so it made sense to look around us for inspiration,’ says 2MZ founder Lloyd Touwen. ‘Ghanian ‘kente’ cloth was the starting point for our colour combinations.’

A Bullet From A Shooting Star by Alex Chinneck

Comprising 450 pieces of latticed steel, Alex Chinneck’s inverted replica of an electricity pylon leans precariously over a road on the Greenwich Peninsula. ‘I was inspired by the incredible history of industry and power generation on the site,’ he says. As well as referencing the past, the 15 tonne sculpture points to 15,000 new homes planned for the site.

Future Cities Catapult has curated prototypes and talks exploring how ‘smart’ objects, buildings and infrastructure might change London. ‘Whilst the dimensions of our streets remain the same, the dynamics of how we use and inhabit them evolves with changing technologies,’ says the team. ‘What might these dynamics feel like in the time of the Internet of Things?’

Following the successful launch of Brixton Design Week in 2014, architects Squire and Partners will create a ‘street gallery’ at the former Bon Marche department store. ‘We have pulled together a dynamic community of Brixton-based artists and designers to bring the store back to life and animate the surrounding streets and neighbourhood,’ says partner Tim Gledstone.

London Design Festival gets its first virtual design experience courtesy of designer Tino Schaedler of Optimist Designs and director Nabil. The duo have installed a interactive black turbine sculpture in Somerset House’s West Wing that pushes the boundary between the physical and virtual space. 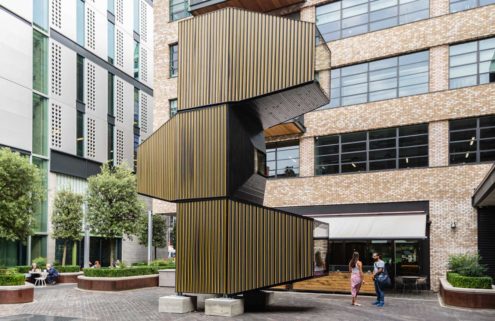 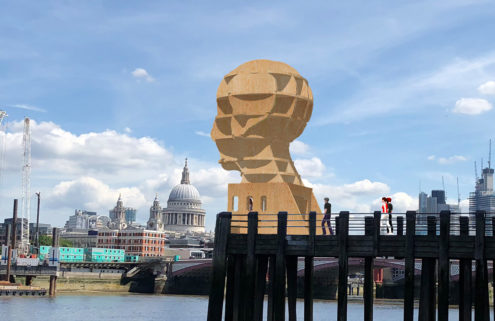