It’s been a decade in the making, but Atelier Jean Nouvel’s National Museum of Qatar has finally opened to the public in Doha.

Nicknamed the ‘desert rose’, the colossal 560,000 sq ft museum comprises a series of interlocking discs. Its unorthodox shape is inspired by the formation created when minerals crystallise beneath the surface of a salt basin.

‘The desert rose is a symbol of the desert because it’s an architecture created by time and the desert itself,’ explained Jean Nouvel at the museum’s inauguration. ‘Nobody knows what the inside of a desert rose looks like, and we created a typology of intersections that makes you question what is inside it.’

Sections of the overlapping circular roof shade the central courtyard at the centre of the museum, while the building’s sandy concrete shell pays homage to its desert setting.

Some 1.5km of galleries fill the museum’s rings. They guide visitors through the history of Qatar, delving into its oral histories, archaeology, art, music and poetry. The pathway culminates at the restored Palace of Sheikh Abdullah bin Qassim Al Thani, built in 1906 as the home of Qatar’s royal family –  and used later as the original National Museum.

Read next: The most anticipated museums opening in 2019 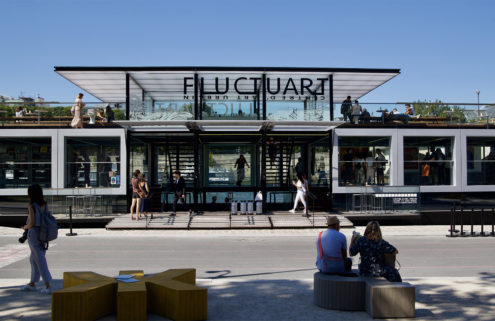