We visit the Soho loft that ‘incubates’ all her ideas

Alex Eagle cut her teeth in the fashion world with stints at Tank magazine and Harper’s Bazaar. She launched her eponymous store – a fashion, design and art emporium within a townhouse on London’s Walton Street – in December 2014 and is the creative director of growing retail empire, The Store x Soho House.

All the stores she helms follow a similar principal. ‘They’re like an open, shop-able private home for everyone to spend time and where everything is for sale, from the candle burning to the record playing,’ says Eagle.

Many of her ideas stem from her own home, the Soho loft she shares with her partner. ‘It’s the inspiration for everything I do,’ she says.

With the opening of The Store x Soho Farmhouse in Oxfordshire this month – following the Berlin flagship, which launched earlier this year – we thought it fitting to pay her a visit in London for the first instalment of our new series, How I live.

What is a home to you?
Alex Eagle: Somewhere I feel comfortable and where I can rest.

What do you like best about the space?
An open-plan space can be anything you want. It’s like a set that we re-dress all the time. It’s not a jigsaw puzzle in the same way that a Victorian house is. Anything can fit anywhere if you want it to.

Over the last few years, we’ve figured out where the light falls best and where we like to sit and read. There’s a personal, family side and a more social side but nothing is set in stone. We constantly move things around.

Do you use your home as a test bed for the stores?
Absolutely. The loft has become an incubator for everything I do. The kitchen space was our office before we all moved downstairs, so the way that people used it – the way they cooked, made tea and shakes for each other and sat around the table – inspired the concept for the store in Berlin. No one had their own desk, they could move around, and that’s now become the policy of our company.

I still have many of my meetings in here. If I’m trying to get a designer to understand the concept for the stores, this is where I bring them. And many of the objects we own eventually find their way into the stores, including our sheepskin sofa.

So someone following you on Instagram could spot something they like in your home and hope it lands in one of the stores soon?
Totally.

What three objects would you save in a fire?
The Tanya Ling artwork in my bedroom. It’s like a cloud that I can stare at for hours. I use it to meditate without even realising I’m meditating. I see it more than I see my own reflection.

The George Nakashima chair changed our approach to furniture. I saw it in a window in Clignancourt flea market in Paris and fell in love with it. I didn’t know anything about Nakashima at the time but, when they told me the price, I still thought it was worth the money. You shouldn’t have to know about a designer to recognise something’s worth, which was a pivotal realisation for me, when it came to choosing objects for the stores.

I would also never part with the malachite box that I was given for my birthday.

If you could inhabit any space in any building across the world besides your own, where would it be?
Donald Judd’s house on Spring Street in New York. I could just move straight in.

What are your favourite Soho haunts?
Babette Kulik’s The Society Club – you can have a cocktail while flicking through the brilliant selection of books. For food, I head to Barrafina or ice cream shop Gelupo. I go swimming in the David Chipperfield-designed pool below Café Royal. And for art, I visit The Photographers’ Gallery.

What keeps you hooked about London? Do you think you will always live in the city?
I was born and bred in London. You never feel trapped here. London is so diverse – you could live in Clerkenwell or Bermondsey and have a completely different experience. Whatever I want from life, I can find it in London. 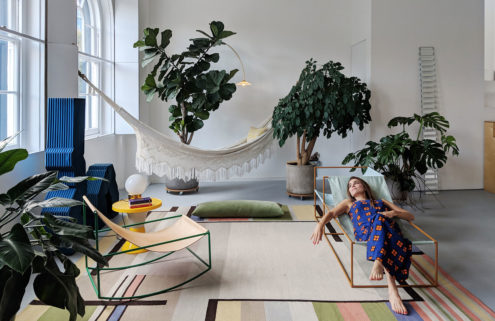