The US artist is handing out batons

Feeling furious today? Doug Aitken has a solution… if you’re in Denmark, that is.

The US artist has created an ‘anger room’ shrouded by greenery inside an Aarhus warehouse, where participants are handed a baton and invited to smash up its contents.

Visitors to Aitken’s The Garden are both a voyeur and a performer in this living artwork – part of the inaugural ARoS Triennial. As they step into the concrete warehouse, they’ll spot the indoor jungle glowing in the dark. Inside this misty, humid garden they can watch the action in the clinical white domestic chamber enclosed. Then it’s their turn to do what they like to its furniture.

‘When we think of art, we usually think of the object and the viewer,’ says Aitken. ‘I wanted to create an artwork that’s an activator – a piece with friction and energy.’

Doug Aitken’s The Garden is one of a series of installations across the city that make up the ARoS Triennial, which is split into ‘The Past’, ‘The Present’ and ‘The Future’ and examines man’s relationship with nature. Also included are works by Cyprien Gaillard and Elmgreen & Dragset.

We caught up with Aitken to find out more about his blooming, angst-filled creation.

What’s the significance of the gleaming white chamber enclosed in bullet-proof glass?
I’m interested in how we came to a point where our living environments are so incredibly removed from any connection with nature. It’s the frame for the modern condition.

You’ve created a tropical jungle in urban Denmark. Why this juxtaposition and how is the foliage kept alive inside the warehouse?
A grow light keeps the garden alive, and six or seven times an hour, plumes of mist are sprayed on the leaves from above. This humid garden is a living, breathing artwork that’s deliberately at odds with where we are right now. It’s dislocated from its surroundings yet it’s flourishing. That speaks about the present and the landscape we’ve created for ourselves.

Why an ‘anger room’?
I wanted it to be a place where anything can happen. So it’s broader than just an anger room. Starting tomorrow, every viewer can go into this work for 10 mins and we’re giving them unlimited freedom to do what they want inside. So far 20 or 30 people have been in it and almost everyone wants to annihilate it – but everybody has a different approach.

That might be because you hand them a baton?
Yes.

What happens to the work when it gets disseminated via the live stream and Instagram?
I want to challenge the static quality of how we see art. If art is an object, that object can be captured and flattened as an image. But if you have something that is performative like The Garden, every image will be different. It breaks that idea of narrative and becomes a series of fragments that move through space at the speed of light.

Destruction has been a pervading theme in your work since you exploded your own house for an installation in 2010…
There’s a correlation between that work and The Garden but I’m less interested in destruction and more by the idea of entropy and change.

‘The Future’ is a significant part of the ARoS Triennial theme. How does this installation look ahead?
I interviewed the Italian architect Paolo Soleri at his desert city of Arcosanti right before he died and he said: ‘The future does not exist.’ I tend to agree with him. I’m interested in the present. This work is living, breathing, growing and changing. Every viewer will give something different to it and explore it in a different way. I’m interested in art that can live in real time with us.

ARoS Triennial runs until 30 July 2017 in sites across the city. Doug Aitken’s The Garden is located at Osthavnsvej 6, 8000 Aarhus C.

Read next: Doug Aitken builds a Mirage in Palm Springs for Desert X 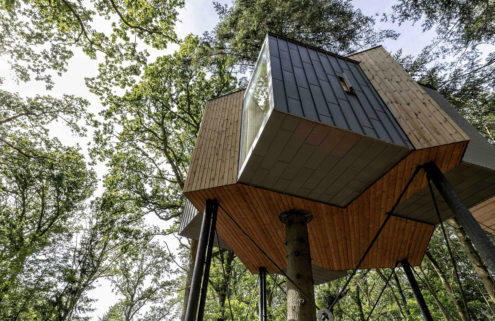 Løvtag cabin is built around a tree in Denmark