Fabric fragments of his homes and studios

Artist Do Ho Suh has created an ethereal fabric corridor at London’s Victoria Miro gallery modelled on sections of his homes and studios around the world.

Each segment of the Korean’s installation is meticulously stitched in brightly coloured polyester fabric that has been stretched over a series of concealed steel frames. It represents a linking point or ‘hub’ within its respective building.

Do Ho Suh eschews facades or grand reception spaces, instead focusing on humble corridors and landings. He reproduces these overlooked interstitial spaces in loving detail.

In the jade segment, for example, we find the wooden latticework of the doors and windows of his home in Seoul; a gold section reveals the fine mesh grille of a ventilation unit at his London studio; while sombre forest green embroidery represents the decorative antique door handle from an apartment in Berlin.

‘The work is related to my long-held desire to blur the boundaries of geographical distance,’ the artist has said. ‘Without these mundane spaces that nobody really pays attention to, these grey areas, one cannot get from point a to point b.’

Suh has extended the theme in two linked works at Victoria Miro’s Wharf Road space. An architectural drawing ‘My Homes – 3’ (2012) showing the titular buildings linked as one continual structure in three strips: in floorplan, elevation and axonometric projections. The video ‘Passage/s’ (2015), from which this exhibition takes its name, is a stately journey through an apparently endless corridor.

Despite – or perhaps because – of his peripatetic life, Suh’s work suggests deep attachment to these building and the people associated with them. He has recently completed a three-year ‘rubbing’ of his old New York apartment – the ‘Rubbing/ Loving Project’ – in which a surface impression of the space was transferred to paper through the gentle caress of coloured pencil and pastels.

Following the death of his old landlord, and Suh’s departure from the New York space, the artist created a set of smaller polyester sculptures. The white Exit Series (2016) presents apparently mundane but nonetheless intimate details of the artist’s former living space: door handles, name plates, a string of lightbulbs with a coiled flex: like ghostly, commemorative husks to a site of connection. 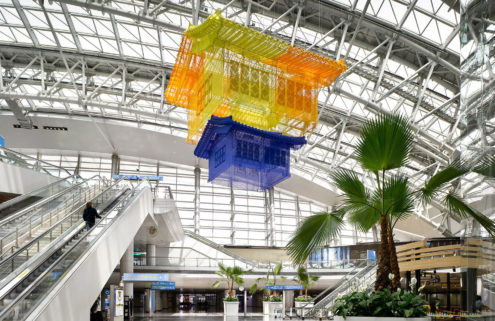