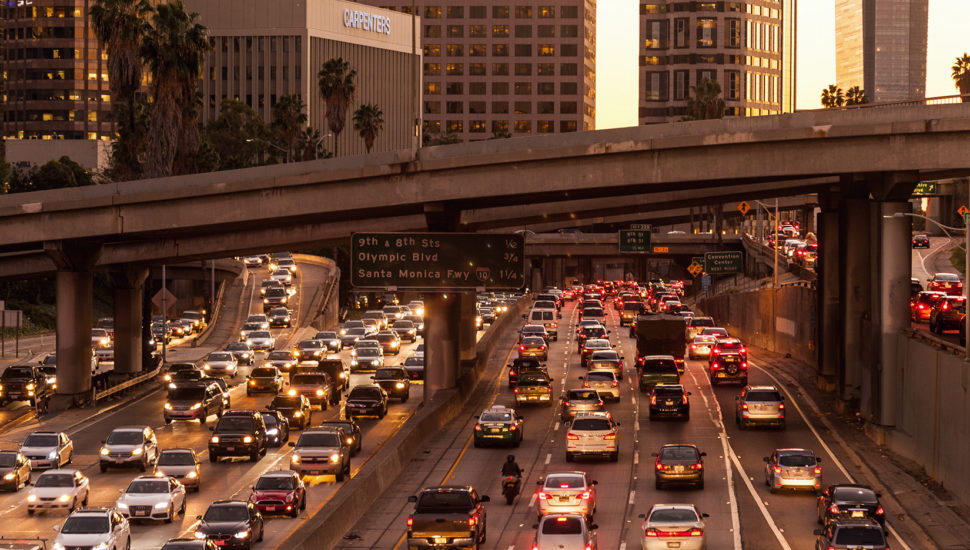 California’s oldest freeway is the focus of an experimental documentary film by Adam R Levine and Peter Bo Rappmund.

Formed of woven-together still images, edited with a stuttering rhythm, and set to a collage of sounds, Communion Los Angeles takes us on a poetic journey along the Route 110 through the Los Angeles metropolitan area, from the mountains to the sea.

As it travels along the route, crossing through different communities and landscapes, this alternative road trip film takes in the mundane, scenic and gritty sights which make up this often-misrepresented city.

Levine and Rappmund are giving a talk at the film’s UK premiere at London’s Barbican Centre on March 12. They tell us how the film was created.

Where did the idea for the film come from?

Levine: We were interested in the idea of psychogeography which is about exploring geographical spaces in unconventional ways. We wanted to create a poetic portrait of an urban environment that attempts to uncover its soul through its culture, its history and its people’s personal experiences.

The video essay ‘Los Angeles Plays Itself’, which was made by Thom Andersen, our graduate mentor at the Carlarts School of Film/Video, was a big influence, as it seeks to show the city’s true character and how it has been portrayed by the local film industry.

Route 110 is a historic piece of infrastructure that runs from Pasadena via downtown Los Angeles to San Pedro on the coast. We thought that it was a good skeleton on which to hang a portrait of the city.

How was the film made?

Rappmund: It is made up of still photographs taken on a Canon 5D camera. They were then put together digitally to make an animation. It was a very time-consuming process, but worth it because we had more control over the moving imagery.

Instead of creating a storyboard in the planning phase, we used location maps extensively. Months and months were spent researching where to shoot in the landscape before we grabbed our cameras.

Levine: The film is made up of two north-to-south journeys, one during the day and one at night. We had to return to the freeway at night because of the city lights: the city is so flat that the illuminations generate a light field.

We both had preconceptions about the freeway, but we learnt a lot about it through the process of shooting the film. The northern section is designed for modern road tripping but as you head into the downtown area it turns into an eight-lane road which leads to the harbours and airport and it becomes all about moving people.

Is there an underlying message to film?

Rappmund: We worked on this film for close to eight years, so it is a little hard for us to even know what the underlying message is now. We started more in the vein of psychogeographers exploring the freeway, but then things shifted, in a sense, to the life that is always happening around these structures.

For me, space can be viewed through Burke’s idea of the sublime. There is a tug between feeling insignificant and being in complete wonder (or horror) at what we are doing to the earth, to ourselves. It is scary, beautiful and frustrating, all at the same time.

Where does the film’s title originate from?

Levine: The name of the film comes from Joan Didion’s observation that driving on the freeway is the only secular communion Los Angeles has, which gives the experience a semi-mystical significance. It’s weird because cars are private spaces, yet everyone on the road is doing the same thing together. It makes you think about what defines a community and what is a public space.

Read next: 10 music videos that show the changing face of LA through the decades