Art I by Emma Tucker

The piece is inspired by Burman’s childhood visits to Blackpool, to see the illuminations, as well as her family’s ice cream van – a neon version of which sits at the base of the gallery’s steps.

Burman has recreated a whole host of figures from mythology, including Hindu goddesses as well as Indian queens and warriors, as well as installing snowflakes, lips and the om symbol.

Tate Britain’s neoclassical columns are wrapped in strands of neon light, while flowers and swirls bedeck the doorway. A new version of Britannia crowns the whole light installation, transformed into Kali – the goddess of liberation and power.

Although designed as part of the Diwali Festival of Light, Burman’s piece will continue to light up Tate Britain until 31 January 2021. 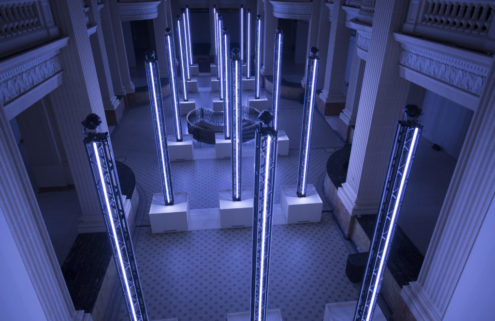