Six brightly-coloured tiny homes have popped up across the UK seaside town of Folkestone, created by artist Richard Woods.

Dubbed Holiday Home, the installation is part of the Folkestone Triennial, which kicks off on 2 September in Kent, and is a tongue-in-cheek comment on the UK’s growing housing problem.

‘I was in Folkestone 18 months ago and got given this strange leaflet saying, “Have you thought about turning your property into cash?”’, Woods told The Guardian. ‘Basically, “give up your house so someone can buy it as a second home”.’

He adds: ‘The idea grew out of that: to make six identical bungalows and install some in very desirable locations, some not, but keeping it very open-ended.’

Woods’ cartoonish holiday homes have been installed on a mix of absurd and prime sites across the town, including its beach front, atop a brick wall, and opposite the town’s local Wetherspoons pub. Another meanwhile floats on the harbour.

While each is unique, they’re all outlined with Woods’ signature heavy black lines, and riff on the form of the classic British bungalow.

The Folkestone Triennial official begins 2 September, and runs until 5 November.

Read next: Hot pink houses cause a stir in LA 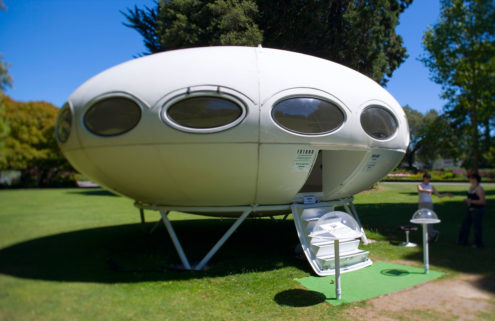 Rare Futuro ‘UFO’ house is for sale in New Zealand