The Los Angeles home that Modernist architects A Quincy Jones and his ex-wife Ruth Schneider designed and built has gone on sale for $1.4 million.

Constructed in 1939, the Jones House & Studio #1 (as it is called) was the couple’s first home, located on the western slope of LA’s Laurel Canyon. They designed the 2,158 sq ft structure together while Jones was still an apprentice learning under architect Burton A Schutt.

Though their marriage didn’t last – they divorced in 1942 – the property continued to evolve. Jones opened his own practice after returning from World War II and converted the duplex structure into a live/work space, with half the building devoted to his design studio.

Today, it stands as a two-bedroom house, following works to revert the property back to full residential use.

But traces remain of the ideas Jones would develop throughout his career, including its light-filled, open-plan and flexible spaces. The property retains its original waffle ceilings and floor-to-ceiling windows. 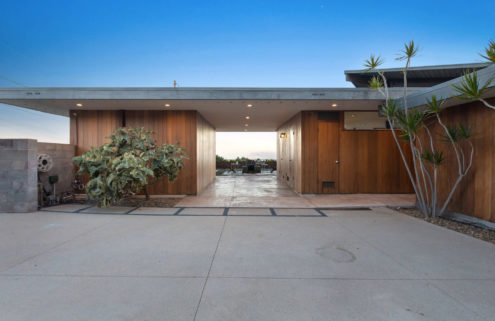 Modernist landmark The Shneidman House has listed in LA for $3.79m