Architecture I by Tom Ravenscroft

New models for 21st century living and beyond?

‘Design should be an enabler not a barrier – life doesn’t stand still,’ says architect Brendan Geraghty. This is the thinking behind his practice’s freshly completed project, an adaptable housing development in Croydon.

The scheme is the first built example of Geraghty Taylor’s livinHOME concept – a group of residences designed to be adapted as the spatial demands of its inhabitants change over time. ‘Buildings that survive are adaptable, it allows them to remain relevant,’ explains Geraghty.

Externally the building is articulated as a modern terrace of six gabled three-storey townhouses, but inside the block is currently sliced into 11 units – all but one of which were sold off-plan. While each house operates as a single six-bedroom home, it can be divided into a two bedroom flat and a duplex, or arranged as three stacked flats, allowing upsizing and downsizing to easily take place.

In an interesting contrast to the Georgian townhouse design – which Geraghty believes has ‘taken to adaptability well’ – the main influence for livinHOME comes from modern, agile office design. ‘They have an independent core, with floor plates that are adapted on a regular basis – they are designed to be changed,’ he says.

Following the office’s lead, they have relocated the staircase from deep within the plan to the front of the building, meaning floors can be accessed without having to enter accommodation areas. ‘It’s liberated the design,’ says Geraghty.

We spoke to the architect to find out more.

What is the benefit of an adaptable home?
Brendan Geraghty: Knowing how you will react as new and different demands are made on you or your house. Upsizing or downsizing has been thought through and remodelling of the interior has been made easier. Change does require some modest building activity, but it is a fraction of what would be required for a traditional extension or remodelling of a house.

What impact could your concept have on UK housing?
It offers a slightly different model, one where permanence and transition are simultaneously welcomed. It allows for change and thereby deals with the issues that the bedroom tax was created to try and solve. The flexible interior can respond to context, community and personal change so the economic life of the building is better. And it’s sustainable because it should be useful for longer.

Will adaptable homes improve the communities in which they are built?
Yes, undoubtedly. There is always a percentage of people in our communities that are transient, which can be a positive dynamic as it adds to the diversity of people. However, the foundation of any existing or emerging community are the people who will remain for long periods. They put down deep roots that contribute to, and draw from, a range of social and economic activities and networks.

You anticipate that your designs will be adapted. In general, do you think architects are too protective of their designs?
Many buildings are static, ‘full stops’ in time. However we live in ever-changing economic, social and environmental habitats. We need to come up with designs that retain an overall architectural quality while facilitating easy movement and change. 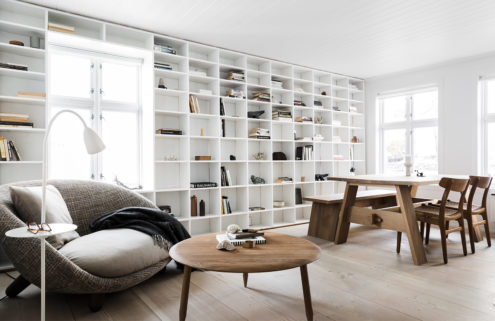 Bergen townhouse renovated by architect Todd Saunders is for rent