Interiors I by Oli Warwick

9 legendary musicians’ homes you can visit

They might bare their soul in their songs, but nothing reveals more about a musician than where they choose to lay their hat – or where they grew up.

From humble homesteads to grandiose mansions, and from classical composers to psychedelic rock stars, we’ve sought out 9 famous musicians’ homes you can visit for yourself.

In the heart of Vienna’s Old Town, the Mozarthaus museum is a stellar example of 17th-century Baroque architecture. It houses the legendary composer’s last surviving Viennese apartment which he lived in from 1784 to 1787. A full renovation of the building was completed in 2006, bringing Mozart’s ‘most elegant and expensive apartment’ back to its former glory.

Number 56 Hope Road was bought by reggae superstar Bob Marley in 1975 when he signed to Island Records. As well as housing the Tuff Gong Studios, the 19th-century colonial property in Kingston was the site of the attempt on Marley’s life in 1976. The musician’s home is now open to tours as the Bob Marley Museum.

The Dyess Colony in Arkansas was a 1930s New Deal initiative to help poor families after the Great Depression. Johnny Cash’s family was among those who benefitted from the scheme, and you can visit the recently restored colony and Cash’s boyhood home – a simple one-storey farmstead.

The French might claim him but for the first few months of his life, Fryderyk Franciszek Chopin’s family lived in an annexe on the estate of Count Skarbek in a village west of Warsaw. The original wooden Skarbek dwelling was in ruins by the end of the 19th century, but progressive work to rebuild the structure and appearance of the former house was spearheaded by Polish architect Franciszek Krzywda-Polkowski.

Between 1968 and 1969 Jimi Hendrix lived in a third-floor flat on Brook Street in Mayfair. Now his former abode forms part of the Handel & Hendrix Museum, refurbished with period pieces that replicate the apartment when Hendrix lived in it at the peak of the psychedelic 1960s.

Architect Bret Thoeny’s stark design for Prince’s 55,000 sq ft Paisley Park estate gave little away from the outside, but in the wake of his death, the musician’s family have granted fans access to the fabled music and film production compound that doubled as his home. ‘Back [in 1985] this wasn’t done. Artist’s weren’t building their own compounds, only large companies or record labels were,’ said Thoeny. Interiors of the musician’s home and studio feature murals of the megastar and of course myriad shades of purple. Take a look inside Paisley Park.

Among the musician’s homes you can visit, few are as big a tourist draw as Graceland. In fact, Elvis Presley’s iconic mansion is second only to the White House as the most visited home in America. It’s an emblem of The King’s monolithic celebrity, from the opulence of the lions and Corinthian columns at the entrance to the indoor waterfall in the Jungle Room.

Designed by E Stewart Williams in the late forties, Twin Palms was commissioned by Frank Sinatra as a weekend escape for his family. Steering the singer away from his initial requests for a Georgian mansion, Williams instead presented Sinatra with a chic desert home that would provide a glamorous backdrop to his tumultuous life.

Visiting the modest house in Queens, New York, where Louis Armstrong lived is like stepping back in time. The 1970s kitchen is a particular highlight, while the gold fixtures in the bathroom hint at the international success the jazz great enjoyed while living in relatively humble surroundings.

You’ve probably noticed that there are no female musicians included on this list – indictment of the music industry’s attitude to preserving the legacy of its female stars. But the wheels of change are slowly turning… starting with the crumbling childhood home of Nina Simone.

A group of African-American artists have recently pooled their resources to buy the weather-beaten clapboard home in Tryon, North Carolina. It aims to document Simone’s significant cultural impact, while also saving a period building from falling into ruin. Watch this space for more on its opening when it’s announced.

Read next: 10 incredible artists’ homes you can visit 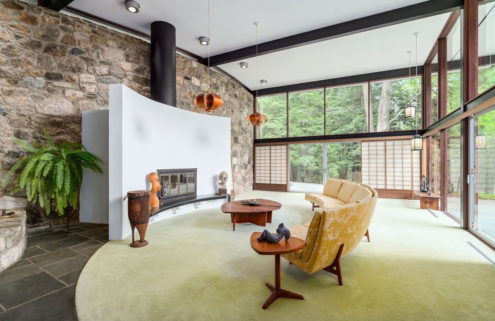