Art I by Alice Bucknell

Designer digs in the city

For centuries the city has been a source of inspiration for artists. But while its sensory stimulation might fuel the creative soul, its neon highs are sobered by rising rents and lack of affordable studio spaces.

Thankfully artist-in-residence programmes are here to help. Laid on by galleries, cultural foundations, hotels and schools, they offer spaces where creatives can live and work for free in some of the world’s most exhilarating and expensive cities.

From starchitects’ crash-pads to five-star hotels, we’ve rounded up eight of the most enviable urban residency spaces for artists and architects. Our suggestion: pack light. These are some generous hosts, offering everything from free buffets to Frank Lloyd Wright furniture in which to recline.

Duration: Six months
West-coast wanderers can slip into a California state of mind while roosting in the Rudolph Schindler-designed Mackey Apartments. Every year, the MAK-Schindler residency invites two artists and two architects to explore the intersection of culture and the built environment of Los Angeles. MAK steps in with a healthy monthly stipend and the LA connections to realise resident projects, which are made public through a final exhibition.

Residency duration: Three months
This research-based residency programme was launched in October 2016 by the Harvard Graduate School of Design team. Taking inspiration from its namesake, Lord Rogers, the Fellowship does not distinguish between disciplines; any accomplished professional or scholar whose work addresses the built environment is encouraged to apply. Six fellows will be selected each year for a 12 week residency in Rogers’ famed Wimbledon House – which he built for his parents in the 1960s. Next year will also see the Modernist building filled with lectures, exhibitions, and parties.

Residency duration: up to six months
Residencies at this award-winning warehouse conversion completed by Durbach Block Jaggers in central Sydney are available to architects only. They stay for an intensive 12-week programme – organised by the Australian Institute of Architects – that incorporates a research-by-design project. The AIA facilitates residents’ connection to the art and culture pouring out of Australia’s capital by staging an exhibition and public events, while footing the tab for a return flight down south.

Sitting just on the edge of the city, the Scottsdale base is connected to both urban life and the desert landscape. Opened in 1937 as a winter studio, Taliesin West continues today as a working architecture school founded by Frank Lloyd Wright himself. Spread out across the desert floor are a cluster of single-storey, organic structures, including art studios, student accommodation, a cabaret theatre, and a museum. Sweeping panoramas of the McDowell mountains can be contemplated from Wright’s sun-filled living room built from the rocks and sand of the Sonoran Desert, or while floating in the back garden’s elevated pool.

Residency duration: one Sunday night
For roaming creatives who are unable to buckle down for months at a time within a single zip code, the Ace hotel has concocted a one-night-only spin on the traditional artist-in-residence programme. Since 2014, the Manhattan and Shoreditch-based Aces have opened their doors each Sunday evening to artistic nomads who swap a space to lay their head for something brilliant to come from it. ‘We feel a change of pace and place are good for the creative process,’ says the Ace team.

In partnership with institutions such as The Museum of Art & Design, Tomorrow Lab and Printed Matter, Ace has welcomed dozens of artists to its residency programme: the brevity of which allows for an incredible variety and volume of creative output. ‘Constraints can be a great way to open up the thought process,’ the group adds. ‘We’re also very transparent. We try to give honorariums when we can, and are up front about how and when we’ll use media and documentation of artists’ works — but we let artists retain control over their copyright.’

Residency duration: Two months
Tucked away in an undisclosed altbau in leafy Kreuzberg is the first foray into a artist-in-residence programme from The Wapping Project, which moved to its current kiez following over two decades at London’s Wapping Hydraulic Power Station. It offers a space in which mid-career artists aged 33 or older can be actively unproductive. ‘The aim of The Wapping Projects Berlin‘s residency is to provide a period of rest, recreation and reflection for artists and practitioners,’ says curator Thomas Zanon-Larcher. Live-in residents must abide by just one rule: no work is to be made throughout the course of the eight-week hiatus. Instead the emphasis is placed on slow living and re-genesis of the creative process.

Residency duration: three to six months
Spanning two floors and 18 studios, the Swatch Art Peace Hotel artist-in-residence programme welcomes international artists into a space that blends art, cultural exchange, and commerce. For up to six months, artists are given access to their own live-work space designed by Parisian collective Jouin Manku. The residency comes with all the amenities of a five-star hotel, while leisure zones and free-use event spaces scattered across six floors let artists connect with guests from every corner of the world.

In exchange for their stay, residents are asked to leave behind a trace of their time at the Swatch: typically this comes in the form of a site-specific piece that takes up permanent space inside the hotel’s Wes Anderson-esque halls.

Read next: 8 creative retreats for artists, writers and musicians 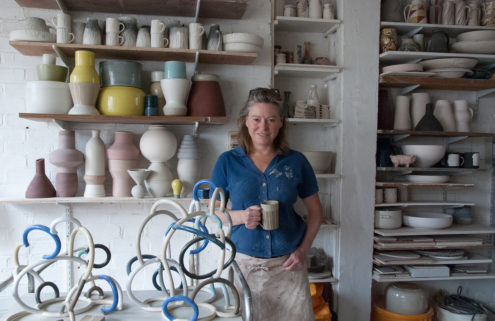