10 tallest buildings topping out in 2017

Meet the giants of tomorrow

China is raising the stakes in the race for the ‘tallest’ man-made structures: six of the 10 tallest buildings predicted to top out in 2017 are in this booming corner of the world. And all are set to exceed the 400-metre mark – shoulders above 2016’s additions.

Predicting top-outs is an imperfect science, made difficult by factors including weather and financing. Don’t be surprised to see a few familiar faces among the jaw-dropping supertalls that are redefining our cities’ skylines.

Helping us out with our predictions is The Council on Tall Buildings and Urban Habitat – the global referee for official building heights. We cross-checked info from its database against developer websites and forums for skyscraper enthusiasts to get the most accurate read on construction progress.

Here’s the 10 tallest buildings topping out in 2017, in ascending order (drumroll please…)

Nearing top-out, the new anchor for Mumbai’s haphazard skyline is a 442-metre condo tower. It has an unusual three-leaf clover base that tapers to a single cylinder, affording all residents wraparound balconies and corner living spaces with unobstructed views.
Completion: 2017

Nanning’s future tallest building is a compound massing that is climbing its way to 445 metres – a hair shorter than Dubai’s Marina 106. Sculpturally expressive with seamlessly integrated uses and services, it has all the ingredients required to spur this city’s aggressive eastward expansion.
Completion: 2019

Newcomer to Dubai’s ‘tallest block in the world’, this luxury residential skyscraper will clip 445 metres in 2017, 19 metres taller than recently topped-out neighbour Marina 101. Minimally rendered, the tower calls on vertical strips of LEDs and a large illuminated aperture for drama.
Completion: 2018

Though our prediction for a 2016 top-out fell short, this Kohn Pedersen Fox Associates-designed financial centre is now verging on the 450-metre mark. Aesthetically, the building pinches together like a spout at its roofline.
Completion: 2017

Muscling into the top five is this ice-like shard appropriately located in subarctic St Petersburg. Originally planned for the historic city centre, the 462-metre tower was relocated to a less congested (and less controversial) area where it will rise as part of a new office and cultural district.
Completion: 2018

With shimmering skin, this office/hotel/apartment tower in a major Chinese port city folds and tapers its way to a staggering 530-metre height. It is one of six supertalls designed by Skidmore, Owings & Merrill currently under construction. They are architects of the reigning world champ Burj Khalifa.
Completion: 2018

Dubbed the Pearl of the North for its giant inset ‘pearl’ housing an executive club, this is the first of two supertalls (> 1,000 feet) anchoring a massive mixed-use master plan at the heart of this important provincial hub. It will top out at a none-too-shabby 568 metres.
Completion: 2018

China-based Greenland Group is developing five of the 100 tallest towers currently under construction, including the leader of the pack racing toward a 636-metre summit. Unless Jeddah Tower mounts a miraculous late surge, Wuhan Greenland will edge out Shanghai Tower for World #2 when it tops out next year.
Completion: 2018

Read next: Indian temple will be the world’s tallest religious skyscraper 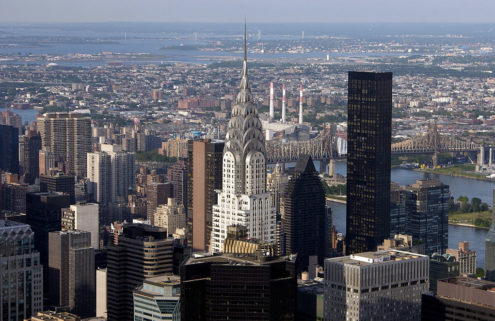