Ten exhibitions not to miss in 2017

A rendering of teamLab's immersive installation at Pace Gallery in London. © 2016 teamLab, courtesy of Pace Gallery

Align your cultural calendar and your travel diary this year with our global edit of the best exhibitions to see in 2017 – from an installation atop a mountain to a city-hopping show in Athens and Germany.

To compile this list of the unmissables, we tapped the brains behind global arts club The Cultivist. It gives its members rare access to every facet of the art world – from exhibitions to dinners in collectors’ homes and studio visits. Securing these privileges requires intimate knowledge of the international art calendar, so there’s no group better placed to share tips.

Here are the 10 must-see exhibitions this year.

This is the first monographic exhibition by leading Chinese artist Song Dong in mainland China for eight years, including some of his best known works alongside rarely exhibited pieces. Several works have been specially commissioned for the unique space of the Rockbund Museum. The entire building will be transformed to convey Song’s artistic development to date, providing an immersive introduction to his life and works.

Martin Creed’s exhibition is just the second show at Holland’s new Museum Voorlinden, designed by architecture firm Kraaijvanger, with gardens by Piet Oudolf. It brings together over 40 works by the iconic artist, whose oeuvre is renowned for its versatility and tongue-in-cheek observations of society. This exhibition won’t disappoint. Visitors will encounter a room filled with balloons and a wall of broccoli paintings, accompanied by live piano music. A truly unique experience!

Don’t miss teamLab’s immersive show at London’s Pace Gallery. The collaborative artistic group that hail from Japan are known for their beautiful artistic installations that focus on technology, and this exhibition features some of their best known works alongside new pieces. We love the audio-visual experience that is ‘Universe of Water Particles, Transcending Boundaries’ and the mesmerising ‘Flutter of Butterflies Beyond Borders, Ephemeral Life’.

This is a fabulous opportunity to see Annie Leibovitz’s popular series ‘Women’, first exhibited in 1999, including new works that aim to demonstrate the changing roles of women today. The show is the final stop of a 10-city tour, and the exhibition setting in the ewz-Unterwerk Selnau – a former electricity substation – in Zurich adds an interesting dimension to the collection.

With reliably brilliant exhibitions, an extensive sculpture garden and stunning views over to Sweden, Louisiana is upheld as one of Scandinavia’s, and indeed the world’s best modern art institutions. This exhibition is part of a series that focuses on a new generation of prize-winning architects who place sustainability and social awareness at the forefront of their creative endeavours. Pritzker Prize-winner Wang Shu’s unique body of work is based on spontaneity, available local materials, and local cultures and traditions.

After the success of its first iteration, Elevation 1049 returns to Gstaad in February with a site-specific winter exhibition that explores avalanches, their unprecedented power and the unexpected. Presented in partnership with The Vinyl Factory and featuring contributions from Allora & Calzadilla, Ryoji Ikeda and Thomas Schütte, the installation will evolve throughout the duration and through the storied landscape itself. Alongside solid architectural sculptures and forms, works will explore the digital collisions of light and sound and the crystalline structures of snow and elemental forms of fire and smoke, creating new choreographies of meaning across the snow-covered landscape. It’s one of a cluster of exhibitions to see in the Alps.

Yorkshire Sculpture park hosts the largest UK exhibition of the works of Tony Cragg, spanning five decades of his career and across multiple mediums. The selected pieces will be shown not only within the beautiful exhibition space but also dispersed across the landscape and grounds, creating a whole new environment for his works to interact with.

Documenta is an exhibition of modern and contemporary art that takes place every five years in Kassel, Germany. This year for Documenta 14, artistic director Adam Szymczyk has chosen to split the exhibition between Germany (Kassel) and Greece (Athens), two countries, which, as we know, have been the focus of international scrutiny ever since Greece accepted a €240 billion ($308 billion) bailout from the EU and IMF in 2010. Although full details for the exhibition have not yet been disclosed, we can promise this will be one of the art calendar highlights for 2017 and worth planning a trip around.

New museum The Broad – a honeycomb-like structure opened in 2015 – has curated an exciting exhibition from its permanent collections that strives to demonstrate the increasingly globalised society in which we live, featuring works by more than 20 installation artists including William Kentridge, Tauba Auerbach, Terry Winters and Sterling Ruby. Spanning all manner of things from everyday experiences to protest movements as important at the Arab Spring uprisings, the chosen works tackle the causes and effects of our world in new and unique ways.

This is the first full-scale retrospective of hugely influential 20th-century Brazilian artist Hélio Oiticica. The exhibition begins with his brief early geometric experiments with painting, before moving into large scale ‘spatial reliefs’. You can see the clear trajectory, and how the influence of his early paintings were transformed from two-dimensional to the three-dimensional installations. Oiticica felt his works were not complete until fully interacted with by an audience, and so the exhibition offers an immersive opportunity to become an active participant. 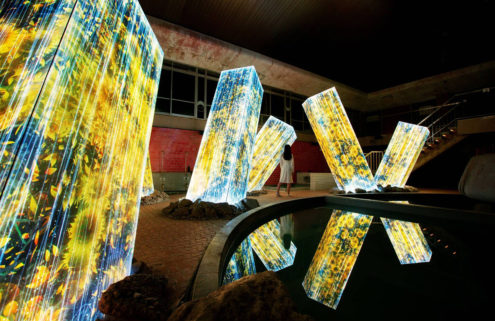 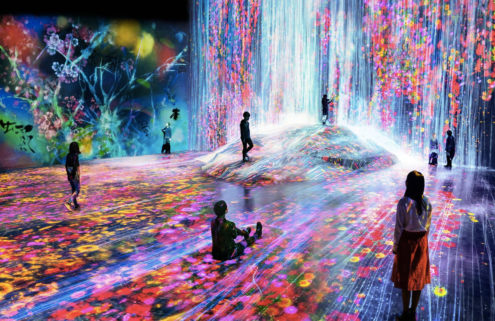 Burberry is turning a former London courthouse into a gallery